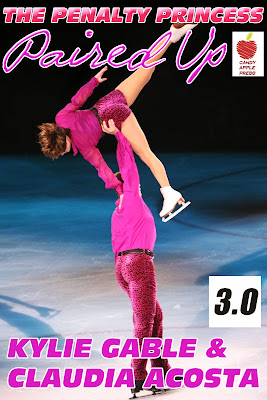 I hope you are in the middle of a great Halloween weekend.  I'll try and post my Halloween pics soon.  I don't know how this longer period of time between books will work for me.  I had hoped it would let me keep the blog better updated among other things. I do think that our new release is a good one.

In Penalty Princess: Paired Up, Danny finds himself on very thin ice (Come on, I've got like the only skating book on Amazon without a pun title). He's a gifted athlete and he takes to figure skating surprisingly well, but learning to obey Michelle and act like Matt's female partner rather than his buddy, might be too much for the hockey phenom to handle.


Soon Danny emerged from the bedroom.  He reluctantly took his place on his knees in front of the couch where Michelle was sitting.  Matt was impressed because this behavior seemed so unlike the Danny Berg he knew.
Michelle couldn't help gloating when she realized that she had defeated the great Danny Berg.  "Well sissy?" she challenged.
"I'm sorry Mistress Michelle.  I am here for my punishment," groveled Danny.
"Very well sissy, I can be merciful.  Pull down your panties and lay across my lap."
Danny thought hard about refusing, but decided that it would only make things worse. She was tough and single-minded.  He took his place on her lap and felt her soft hand lift the hem if his maid uniform.
"I am going to give you ten swats with my riding crop.  I want you to count them off, and for each number, I want you to name a figure skater you hope to emulate.  Let's begin."
"One, Kristi Connelly," winced Danny as the riding crop met the soft pale flesh of his buttocks.
"Good, start with the easy ones," suggested Michelle as she gave Danny another swift swat to his rear, "but if you run out of skaters I'll start over."
"Two, Joannie Rochette."
With each stroke, Danny went through his head trying to think of figure skaters past and present.  Seven was Isabelle Brasseur and eight was Elizabeth Manley.  By the time he had gotten up to nine he was in trouble.  He remembered Jamie Salé at the last minute, but it was taking him longer and longer as the pain from Michelle's blows was accumulating and the list of skaters he could think of was shrinking.
Posted by Kylie at 7:07 PM No comments: 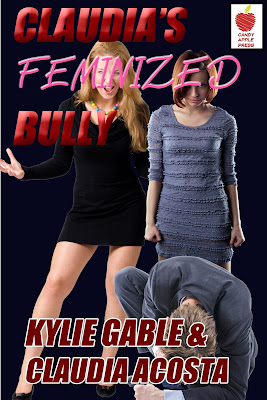 I've been after Claudia to write another one of her adventures up for us.  She surprised me a few weeks ago by sending me a 5,000 word short story.  When I was done we had a 7,000 word tale that I think is amazing and a testament to just what a woman like Claudia can do when she's got her sights set on a guy. I called it Claudia's Feminized Bully.

I had some pretty wild and amazing adventures getting forcibly feminized in college, but this is the flip side of that.  Here, we see one of the times that Claudia actually feminized a guy out of spite and I found it a great read, which I hope I improved by my editing job.

When Claudia was a junior (I think) in college, she met a freshman named Elvis.  I kid you not, he was not even named after Elvis Presley. Anyway, he had the roommate from Hell, a bro named Brent who wouldn't even let Elvis into the room half the time.  Most guys outgrow his brand of bullying by high school let alone college.  Anyway, as I have learned, when Claudia gets riled up, she is like a dog with a bone--she won't let go.

With the help of her roommate Jen and a few other friends, they wait for Homecoming, to teach Brent a lesson he won't soon forget.  If you liked the other two Claudia books, but wanted to see her get mean, this is the one for you.  If you haven't read the other Claudia books, you don't need to in order to follow this one, but you'll definitely want to read them after you've checked out Claudia's Feminized Bully.