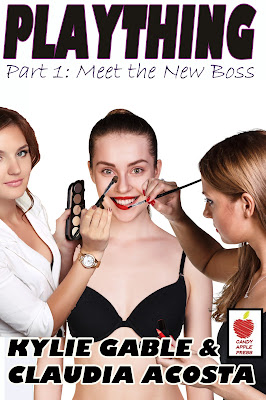 This week was supposed to be a new Jaguar adventure.  Unfortunately, it's been delayed by editing.  Instead, I just published the first book of my new series entitled Plaything.  The first book is called Meet the New Boss and I think you'll like it.

The series is about a guy named Jason who has the best break in his life when two twins Victoria and Veronica move in down the block from him.  They're beautiful, intelligent, and fun, and for some reason, they really like Jason.  They also enjoy playing feminization games.  Throughout high school, they find all sorts of reasons to put him in dresses, pantyhose, and makeup.  It's never mean and though he resists, they're all having the time of their life.

When Jason moves on to college, the girls have no intention of giving up their favorite game.  They arrange to get him to dress up in college too.  Unfortunately, for Jason he's dressed up and dancing to Taylor Swift to entertain the girls on Skype, when in walks his roommate's girlfriend Tina catching him in the act.

She immediately charms the twins and takes control of Jason's dressing, but he soon learns he's not Tina's friend, he's her plaything.  Her idea of fun is definitely not the same as his.  Can he escape with his reputation and sexuality in tact or is he doomed to forever be her toy?
Posted by Kylie at 5:29 PM No comments: 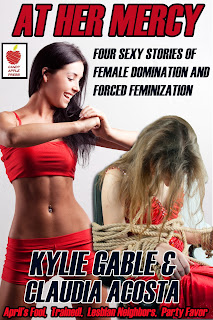 I should have a bit more time to blog in the next couple of months.  I'm trying to get a bit ahead in my other writing commitments.  The new Jaguar book entitled City of Fire and Rage was supposed to be out this week and this time it'll be illustrated.  However, I am still waiting for it to come back from the editor.  I should be releasing a new book on Monday depending on which editor is done first.  You'll either get the first story in my new Twins series or The Jaguar: City of Fire and Rage.

At Her Mercy is a four book collection of some of my more recent work that came out between January 31st and April 16th of this year.  I don't know what Claudia and I were doing at that particular time, but this was a period during which I think we wrote some of our most ruthless and powerful female characters.

They are beauties with brains and brawn who can dominate a male in so many different ways.  From army veterans to teenage sociopaths, these are women who can make your life very difficult if you give them reason to.

April's Fool: When Paul finds himself living in the same condo as the woman who has filled both his dreams and nightmares for the last decade, he has no idea how to react. Like a moth drawn to a flame, he is April's Fool.

TRAINED!: Jason doesn't think a female trainer can be tough enough fro him, but when he begins working out with Bianca she turns his life upside down. Soon, Jason's wife is wearing the pants in the family and Jason is wearing the yoga pants.

Feminized by his Lesbian Neighbors: Lance loves his suburban community. It's a great place to raise a family and the people there believe in old fashioned family values just like he does. When a lesbian couple moves in next door to him, he is determined to drive him out of their neighborhood. Unfortunately, when his plans go awry, he finds himself trapped and about to be subject to an education he'll never forget--a schooling in skirts.

Party Favor: With his girlfriend away for the weekend, Andrew plans to eat a lot of junk food and get some work done. He can't believe his good fortune when two beautiful young women appear at his door seeking a phone and shelter from the rain. What he gets is a wild ride that will forever change him.

These four stories normally cost $11.96 and run 35,000 words. This money saving collecting features all the female domination and forced feminization excitement, but at only half the price.
Posted by Kylie at 9:29 AM 1 comment: 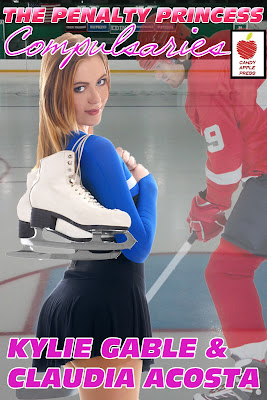 I wanted to do a new series this summer, but I wanted to do something somewhat original.  A lot of stories don't lend themselves to series very well.  A good series has to have a variety of high points and low points and tells a story at a slower pace than an 8,000 word stand alone short story. That's when I dusted off an old idea and decided to finally tell the story of the Penalty Princess.

I'm not a huge figure skating fan, though I have followed it.  Any sport where the result is determined by an election rather than a scoreboard feels too subjective to me, but  I really liked the idea of a hot shot hockey player who got feminized by a group of figure skaters for the purpose of getting him to compete in a skating competition.

I'm actually surprised that there haven't been many stories about crossdressed figure skaters.  The costumes female skaters wear are super feminine and show a lot of leg. The humiliation of being held, spun, and thrown by a male skater, and being on display for a crowd all really lend themselves to the forced feminization theme.

The first story is a little shorter than I'd like.  It's still 6,000 words, but it was the natural cutoff.  There's some major makeover set for the beginning of the second book. However, I think this one has some great feminization and female domination in it's own right.  Think of it as a very kinky Cutting Edge.
Posted by Kylie at 7:01 PM No comments: