The Complete Feminized for his Inheritance 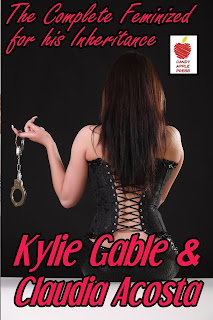 I had trouble deciding when to publish The Complete Feminized for his Inheritance because it kept selling and selling. I usually wait until demand dies down a little to do that sort of thing.  The thing that most amazes me about this book is that it was done as a  commission and I was worried that it wouldn't sell.  I am extremely happy to be wrong.

Feminized for his Inheritance is the story of a twenty-year-old whose father marries a woman barely older than he is.  When the father dies, his son will inherit everything assuming he is married by 23 years of age. His new step-mom does not intend to let that happen and what better way to prevent his inheritance than by turning him into your sissy slave. The Complete Feminized for his Inheritance is 26,000 words long and quite a fun read if I do say so my self.

In a weird timing situation, both Pamela and I finished our series last week.

The Madame X series lasted 4 books and was about a man who was being blackmailed into feminization both at work and at home. The twist is that he had no idea who was doing it to him. The mysterious Madame X knew his deepest secrets and using his work email had contacted him to give him orders. Even worse, his most annoying neighbor found out was quite happy to use his predicament to her advantage. Enslaved by Madame X is the fourth and final book in the series.

The Sissy's Mentor series is a five-part story about a college freshman who winds up through a mixup, spending a summer rooming with a senior who has just graduated.  When she catches him violating his privacy, she decides to teach him a lesson by feminizing him. That's just the first step to a  very unlikely friendship that helps prepare a frightened 18 year old to become a college man.  In The Sissy's Mentor Part 5, it's the end of our series and moving day for our main characters.

I am so disgusted right now and I feel violated. Last night, I discovered a forum where they were sharing over 100 of my stories. I never made any bones about the fact, that I started writing stories because my regular income wasn't meeting my expenses and loving feminization stories, it seemed like the best kind of side hustle. I never intended to get rich making .05 cents per word. I have also paid for cover images and in some cases editing and other expenses to promote my work.

When I was on there, they were even bemoaning that they thought a forced feminization comic site might be going out of business. Hmm, I wonder why when those very same people were posting all their comics to that forum where anybody could post them for free.

As I try and figure out how to pay my bills, somebody is saving $3 on a story that it took me 10 hours to complete.  That story might have only made me $60 and you just stole 5% of my sales. I'd rather they had mugged me.
Posted by Kylie at 10:30 AM 1 comment: 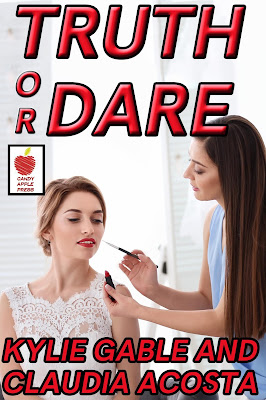 I always try to vary my stories. If I do a sweet one, there's going to be a mean one and vice versa.  I believe The Sissy's Mentor is a sweet series about an older woman taking a younger guy under her wing. That's why I knew that the next thing I wrote needed to be a bit meaner or at least a bit more graphic.

In Truth or Dare, David is a high school senior who is tired of being a goody two shoes. He decides to crash a popular girl's party and finds himself playing with the girls in an intense game of Truth or Dare. What harm could there be in an innocent game?
Posted by Kylie at 2:19 PM No comments: 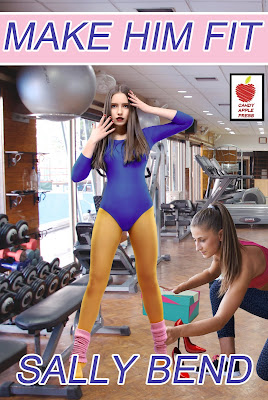 Sally Bend joins the Candy Apple Press family with Make Him Fit, a story of blackmail, revenge, and feminization. She's been an essential part of the feminization community since before I came along, and I'm thrilled to have her joining us. 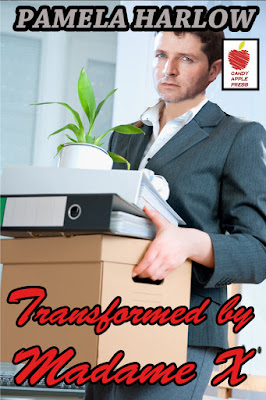 Transformed by Madame X is the penultimate part of Pam Harlow's great Madame X series. It begins with Tracy losing his job and then it starts getting wild. Whoever is blackmailing him is doing so very effectively. Kate and Brooke might be trying to get him his job back, but only Tracy can regain his dignity, especially with a wicked neighbor totally loving her power over him.
Posted by Kylie at 1:52 PM No comments:

I'll have the results of the recent survey up next week, but one thing is clear to me. People who are big fans of mine, who have bought more than a half dozen of my books, haven't really been checking out books from our other writers. I assumed they were checking out those books because Pam and Diane's books generally sell only a bit worse than my own. It turns out that they have been creating their own audiences.

I do want to urge you to check out books by other Candy Apple Press authors if you like my stuff. Diane, Pam, Claudia, and now Sally and Mindi, are all talented writers in their own right. In addition, Diane and Pam work with me to brainstorm plots before their books are published. What we come up with together is inevitably better than what I would come up with on my own without Claudia's input.

There aren't a lot of authors out there writing the type of books I want to read. It's not that there are not great authors out there, but there's a very specific type of feminization that I like and other than Crystal Summers, Ann Michelle, and a few others, nobody is writing it. I don't care much about futas or pills that instantly rewire somebody into a woman.  I've tried to expand Candy Apple Press as much for books to me to read as for anything else. If you haven't tried them yet, I hope you'll give our other authors a shot.  I think you'll find what they write is a lot like what I write.
Posted by Kylie at 10:51 AM No comments:


It's hard to promote books when they're in the middle of a series, but a friend of mine Mistress DJ went ahead and made this for me. I really like it. I guess all I'd add is that Part 5 will be out in 10 days and that will wrap up the series. I hope you like :-)
Posted by Kylie at 2:25 PM No comments: