Plaything IV: Return of the Twins 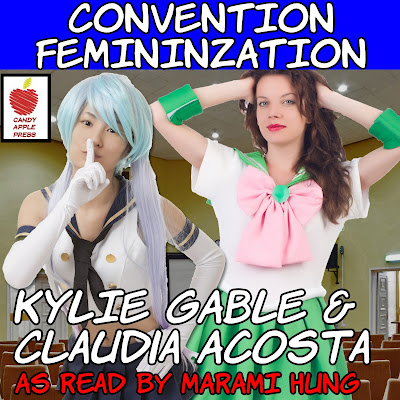 I got lucky.  When I decided to take the plunge into audio books with Calendar Girl, Marami Hung sent me and audition and I happily accepted.  It’s been more than a couple of years since that happenned and the young actress has grown in talent and demand.  I would never be able to get her to work on one of my projects today, but for our good relationship begun on Calendar Girl and continued through Meangirls and Mermaids.

Convention Feminization may be her best work yet.  She’s been to anime conventions and she understands the scene. She gets the jokes and the humiliations, but where Marami always excels is in giving each character a unique voice and personality.  This really comes through in Convention Feminization where it’s a group of girls who come together to feminize two horribly chauvinistic guys at a comic convention.

I think the story itself is pretty good.  Bending the Bookshelf says, “ What ultimately makes the story, however, is the insight that Gable and Acosta demonstrate and the character development they reveal. We actually come to empathize with one of the bullies, and watch as he takes his lessons to heart...Now available as the Complete Convention Feminization, this is a story that works equally well for fans of all genders and sexualities, whether their tastes run more towards female domination, forced feminization, or feminist revenge."

Here's a sample:
Convention Feminization
Posted by Kylie at 8:27 PM No comments: 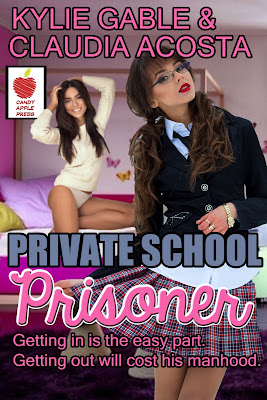 Claudia and I have been going back and forth on this one.  She wants us to go back to doing a book every other week and I just don't know that it's possible without burnout.  We made a compromise.  I have a schedule until June, which I shared earlier this month.  That schedule has a book coming out every three weeks, but Claudia and I struck a compromise.

There is another track of books.  These are unscheduled and when they come out they come out.  They are above and beyond or normally scheduled books and they will come out when they're ready.  It sometimes is going to have my books coming out in bunches.  I know that.  For instance Private School Prisoner is going to coming out less than a week before Plaything IV is out.  I also won't do a newsletter for these extra books.  I'll promote them when I promote the next regularly scheduled book.

Private School Prisoner is an idea that I came up with way back in 2014. The concept is pretty simple, a group of duplicitous schools girls trap a guy at their private school and force him to act as a private school girl and sex slave.  This book is a series, but it's a series of stand alone stories so you won't be lost if you miss one or start reading in the middle.

There's an excerpt and a bit more info on the Amazon page, but I'm really proud of this one.  I think my readers will really enjoy just what these girls do to this guy.