Welcome to College is Complete

I just submitted the 9th book in the series to Amazon and it'll \be live tomorrow.  I feel so psyched that I just completed the whole series.  While the books are only between 5,500 and 7,000 words apiece, taken together I've completed a 55,000 word story in just under 3 months. At the rate I usually go, that's amazing for me.  It feels great to have finished what I started.  I've been very lucky to have had a lot of great support on this project and I want to thank everybody that helped or encouraged. 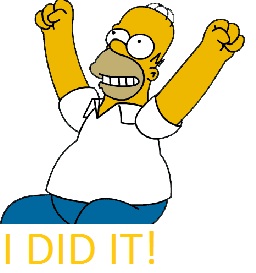 My Next Project - Summer Reunion

At lot of us who have experienced any kind of forced feminization in our lives had it happen when we were too young to appreciate it.  For me it was college, but even that is kind of late.  Whether it was an older sister, a neighbor, or a classmate, a lot of people who experienced feminization did so early in life.

Paul is a writer who has had some success at a relatively young age.   At the urging of his fiancee, he has rented a beach house for the summer to get away from the city and just be alone to write.  It sounds like a great plan, but what he doesn't count on is his past coming back to haunt him in the form of his summer next door neighbor, Monica.

Monica and her friends Gina and Julie used to torment Paul every summer.  He was their doll.  The boredom of a long summer at Buffalo Head Beach was alleviated by turning Paul into Paula and finding new and inventive ways to humiliate him all summer long.  Now, that they're adults, surely that foolishness is behind them both--Right?  He who forgets his past is doomed to repeat it. 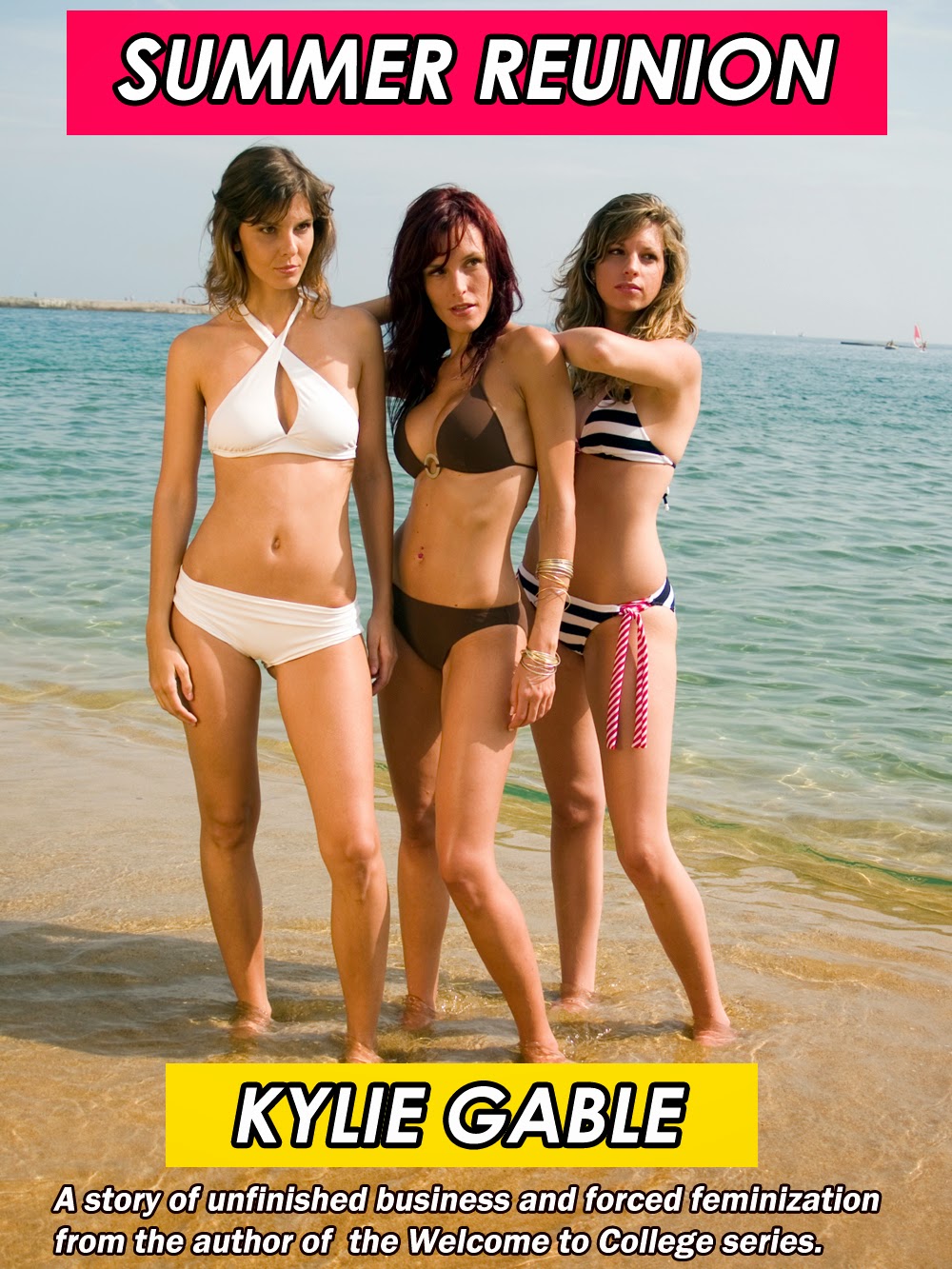 One issue I've noticed reading stories on free feminization fiction sites like Fictionmania is that a lot of readers really don't like dominant women.  I hope that as my readers pay money for my eBooks, they are a self selecting group.  In other words, if you don't like it you won't buy it.

With that said, it still is a fine line to walk.  One of the things I've been proud of in Welcome to College is that Amanda doesn't go out of her way to torment Kylie.  She does do a lot of cruel things to him, but she does it because she has a motive rather than just wanting to see him suffer.  At times, she can even save him.

There was a real Amanda when I was in college and though I didn't always want to go through with the feminization, I never thought she was overly cruel.  The trick is in writing a dominant woman so that she is still dominant and at the same time not a monster.  I am running into that issue with a supporting character as I finish Welcome to College.    I hope that I have made it work.
Posted by Kylie at 8:01 PM No comments:

Kylie is now entering his senior year of college and he finally lands a much needed girlfriend.  Erin is charming and beautiful, but she's a bit different from most girls.  She's not only cool with Kylie dressing up and his domination by Amanda and friends, it actually turns her on.  Kylie is thrilled at having a relationship with a woman, even if it feels more like they're both lesbians at times.  However, Amanda and Karen also drag Kylie down the road to being a guy's girlfriend.   This issue is one of the steamiest in the series as Kylie learns just how far he'll have to stoop to stay on Amanda's good side. 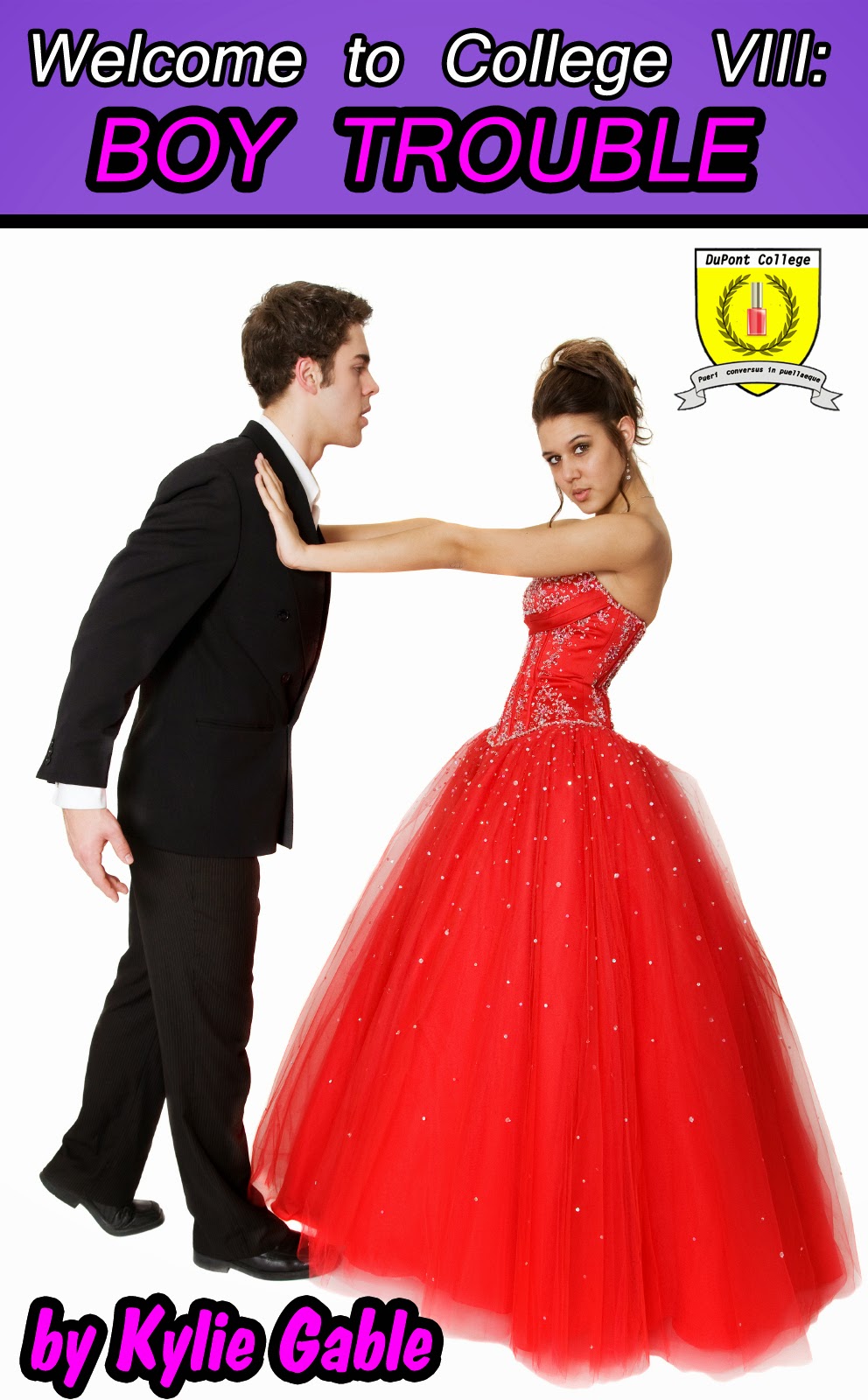 One of the stories that I had to drop from Welcome to College because of space was the story of Maria.  It all began late one Thursday night when we were just Freshmen.   We were all still in the dorm then and we had gotten ahold of some hard liquor.  I think it was Southern Comfort and we began to play drinking games with Southern Comfort and Diet Coke.  We were all drinking heavily and around 1 a.m., Deanna had a bright idea.  She had brought her prom dress to school for her Halloween Costume and decided that I absolutely had to try it on.  She not only had the form fitting strapless dress, but also the silver shoes she wore with it.  They had me go back to my room and get some sexier lingerie.  I was already wearing my wig.  After I was dressed and made up, it was getting close to 2 a.m.

Dressing in public was still new to me at this time, but very few people were up this late so they decided that we should be daring and sneak down to the television lounge.   We did and fortunately found it open.  We turned on the television and played a few games of pool.   Amanda excused herself to go back to her room and when she returned she had a whole lot of rope.  I started to try to make a break for it, but with those shoes, I had no chance against 4 girls who quickly grabbed me and escorted me over to the couch.  With Deanna holding my wrists together Amanda tied my hands together in front of me and then pulled them up and behind my head so that my elbows were sticking out on either side of my head.  The rope connecting my wrists together was then tied behind me to the bottom of the couch.  Karen moved over a small table and Wendy put my feet on top of it.  She tied my ankles together and then to the table legs.

The whole time this was going on, I was trying to talk my way out of it with very little success.  In a moment of utter cruelty, Amanda turned on QVC.  The girls kissed me on my cheeks and then left me to enjoy looking at handbags. I don't know if the girls were planning to return or if they were just too drunk to think things through. I was pretty drunk and after awhile I dozed off.

I woke up to a humming sound behind me.  The clock said 5:45 and there was somebody vacuuming.    As she got close to the couch she suddenly noticed me.   Her name was Maria.  I had seen her once or twice.  Along with an older white guy, they did the janitor work for the dorm.   She was a pretty Mexican woman who appeared to be in her late 30s.  She spoke slightly more Spanish than I spoke English.  She was alarmed, but didn't scream or anything fortunately.  She used one of the English words she knew and asked me, "Police?"  I shook my head and she then got a puzzled look.  As I told her, "no police" she realized I was a guy.

She managed to ask me if it was a joke and I nodded.  She untied me and I slunk back to my room in the prom dress feeling utterly humiliated.   Almost a year to the date, she found me in a very similar position, in a red sweated and black and red plaid skirt.  When she saw me she just shook her head as if to say "crazy college kids."  She actually spent another 15 minutes finishing her vacuuming before untying me.  As I walked out of the television lounge, the last words I heard her say were "nice shoes."

What Does Based on a True Story Mean?

Welcome to College always carries the disclaimer that it's based on a true story.  It's probably closer to what happened than a typical Hollywood biopic is, but I admit that upped the intensity of a lot of scenes in order to create more drama.  I changed the timing of things to allow stories to end on a high note and I changed the names and some details of characters to protect their identities.  I guess I'd say the story was 80% true.   I still have a large number of stories that got chopped to fit in some of the bigger things and they may pop up in future eBooks.
Posted by Kylie at 8:16 PM No comments:

So Was I really Forcibly Feminized?

This is one of the biggest questions that I get.  It didn't start out all that much different than it did in the first Welcome to College books.  I'm not a big guy and it's amazing what a handful of determined girls can do to a small guy.  They physically forced a dress and makeup on me and tied me down.  Then took pictures.  The combination of wanting to be released and being terrified of the pictures getting out made me putty in their hands.  I gladly agreed to let them give me a more proper makeover and posed for new pictures that made it look like I actually liked dressing up.  Then they had me.

In the beginning, I was terrified of the pictures being released even as I cooperated with their more and more outrageous demands.  Eventually, though I got to know the girls better.  They could be mean and they were putting their own enjoyment over my situation, but I guess I knew they probably wouldn't release the pictures and ruin me.  However, I started to get conflicted.  Yeah, I started enjoying parts of this.  They also pushed the envelope, which kept me from really totally enjoying it.

Then they got the really damaging goods on me.  I started worrying about just how much control they had on me and worrying about stuff accidentally getting out.  Overall, I did enjoy the experience and the further I get away from it, the more it becomes a source of so many sexual fantasies and memories.  I think it's something I will want to pursue for the rest of my life.  Dressing up on my own doesn't cut it though, I need a woman directing the action.

Was it all positive? No.  I lost out on a lot of college experiences.   Dating became an impossibility without just the right type of woman who doesn't come along very often, especially at 20 years old.  I didn't have a lot of the social opportunities and I do kind of wish I had a cadre of college friends in my life.  However, Lebron James didn't have a normal college experience either and he's doing OK.

It's capitalism, pure and simple.  I started this blog because I wanted to promote my writing and encourage people to read the eBooks that I have posted on Amazon.com.   I also find that as I come to the end of the huge series that I wrote based on my own college experiences, that I want to explain so much.  I want to tell people where the real Kylie ends and the fictional Kylie begins and I want to fill in some blanks.  I also have left out some of the things that happened because they didn't fit the story I was writing. I hope that this will give me a chance to tell some of these stories and to reflect on that insane four year experience that I had.  I hope you'll be along for the ride.
Posted by Kylie at 8:28 PM No comments: