Cassie and Cassandra: The Domme and Her Mom 3 & 4 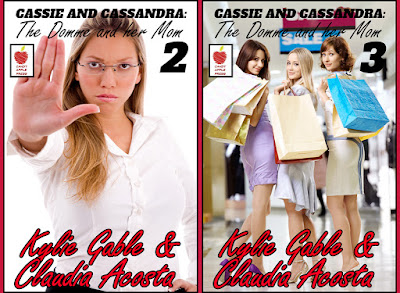 In Cassie and Cassandra #2, we get to learn a lot more about Cassandra whose role in this story is very different. She's a dominant woman who wants not only what's best for her daughter, but also whatever will make her daughter happy.  Not only does David have to deal with Cassandra, but with two other girls at his school who discover his secret and find sissies are way too much fun to leave alone.

In Cassie and Cassandra #3, it's a trip to the mall with Cassie and her friends for David and it only gets more humiliating when he is made to perform a Taylor Swift song in full costume on a video screen at the mall.  If there's on thing that Cassie likes more than shopping with her sissy, it's shopping with her sissy and her mom's platinum card.
Posted by Kylie at 5:13 PM No comments: 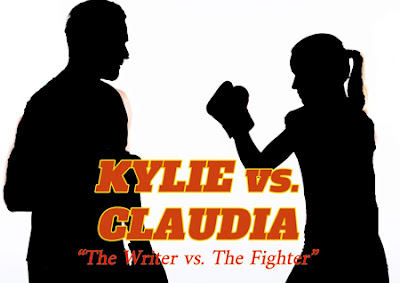 There was a lot I loved about the contest between Claudia and myself.  It was great to see her so enthused about a project and get some validation for her efforts. The book sold pretty well and got some good feedback.  Even without the contest, I do believe it's worth buying.  Now that the contest is over I can admit I was really awestruck by her use of lipstick in her story.  I've never written that way and maybe I should try and learn a couple of things from her for a change.

Of course the final outcome stung.  I lost by one vote and I do tell myself it's a moral victory because she had an advantage as I know some of my readers wanted me to take the place of one of my own characters and be subject to Claudia's whims for a weekend including forced feminization. Well, you got your wish and in October I'll be totally at her mercy and yes, part of that really excites me, but it also scares the Hell out of me lol. If you participated, thank you.  I'm going to get you a copy of my book April's Fool out today or tomorrow. Enjoy!
Posted by Kylie at 5:49 PM No comments:

Cassie and Cassandra: The Domme and Her Mom 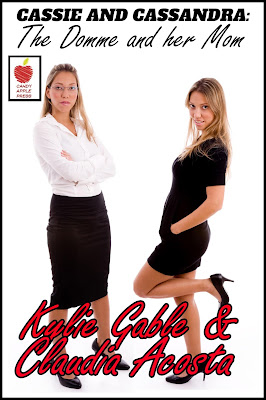 So, I'm back writing my first series since The Pack ended three months ago.  Some stories I write are pretty simple tales of a guy who might be a bit of a wimp and a girl who is probably considerably tougher--if not physically then surely emotionally. She feminizes him and they live happily ever after. Depending on the story maybe they both do and maybe only she is happy with the outcome.  However, when I want to tell a deeper and more complicated story that's when I go to series.  I have a few other series planned, but I'm actually trying to limit the number I do this year to about four.

Cassie and Cassandra: The Domme and her Mom deals with something I touched on briefly in Hamburger Stand Hottie namely since dominant women tend to have dominant daughters, what happens if an 18 year old high school senior decides that she wants a sissy of her own and what if her mother is willing to let her.  After all, she won't get pregnant and if her daughter is going to play with boys, she might as well learn how to do so safely and responsibly.

The plot centers on the relationship between Cassie and a boy named David who is new to town, friendless, and definitely not an alpha male, but what makes the story a bit different is how her mom handles the situation.  Now, I should tell you to be fair that the first story is all about the relationship between our sissy and his young mistress.  Cassandra the mom appears in this story, but she doesn't learn about what's going on until book two and then you get to see her take on things.   The first book is a great story of forced feminization by a girl who knows exactly what she wants and I am sure you'll enjoy it if you like my writing.
Posted by Kylie at 2:50 PM 2 comments:

Well, this is amusing.  I won our writing contest so I get to make a guest post announcing it. Of the people who bought Kylie vs. Claudia just over 35% voted and that vote was real even.  The different in votes?  I beat Kylie by exactly one vote.  Now, I'm not stupid.  I have a feeling I received some of those votes from people who voted for me just because they wanted to see what I would do to Kylie when I made him pay off my forfeit.  I'll take it lol.

This is a huge shot in my arm.  I know Kylie is actually a better writer than I am, but I also like to think I'm pretty good at it too and I hope this result proves it. I got really mad at a reviewer who basically asked what I did.

I do think this blog kind of sucks (sorry Kylie).  There just aren't many people posting.  Since I'm a dominant woman and I like giving little bitch boys assignments, here's everybody's homework.  Answer the following questions.

1. Did you vote?  Who did you vote for and why?
2. Since I kicked Kylie's ass, I intend to punish him for it in October.  What would you like to see me do to him?  I will consider all suggestions and there will be pictures.
3. We have a new book out called Cassie and Cassandra: The Domme and Her Mom.  It's the  first in a series and it's awesome! Buy it ASAP.
4. Sign up for Kylie's Patreon.  It's driving him nuts that he's not searchable and if he gets more subscribers I'll write a regular column on female domination for him.

Thanks for all your help in getting me a win that I am really thrilled about. You can also free to use the comments section to rub it in.  Kylie says free books will be out this weekend.