Plaything 2: Out of the Frying Pan 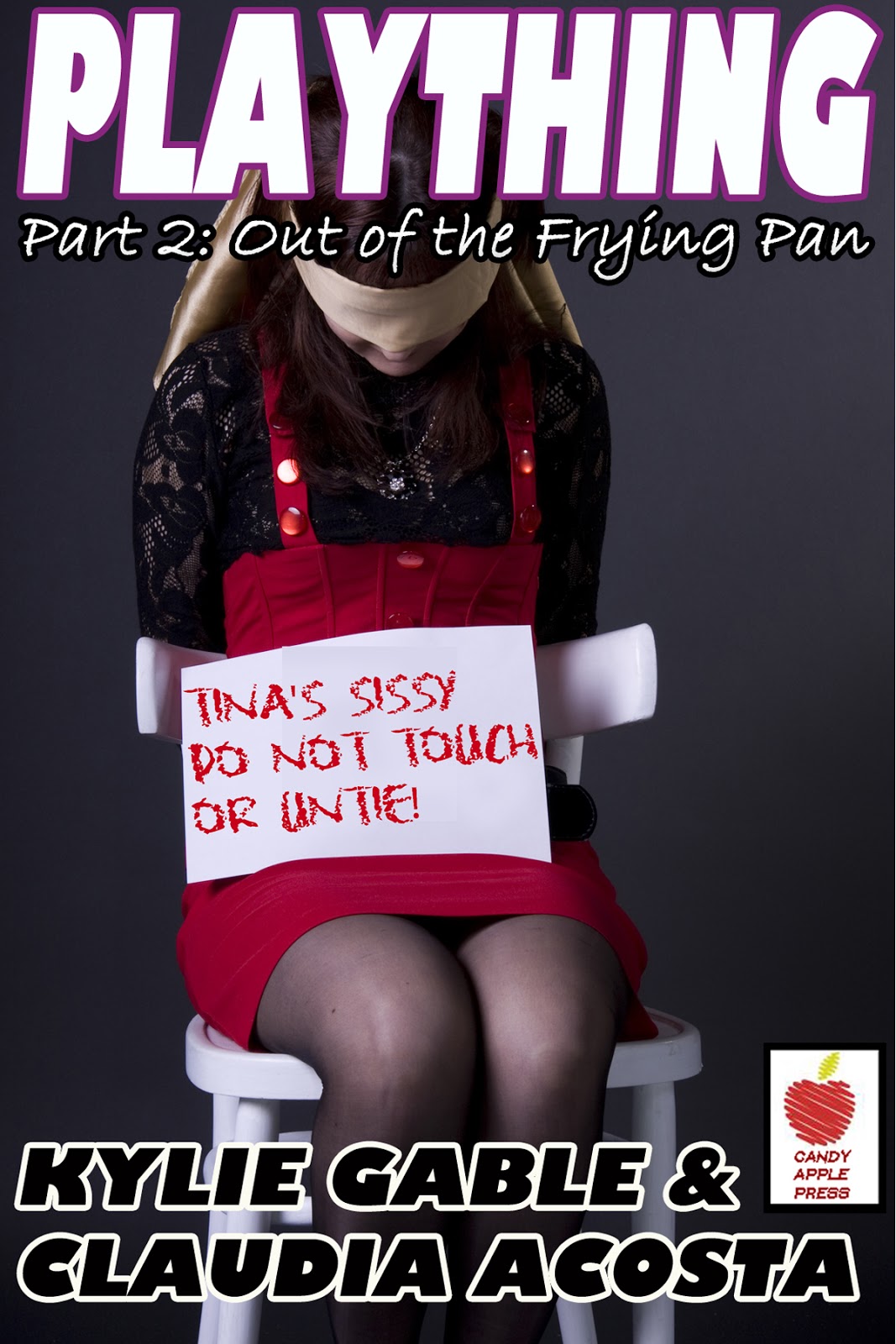 It's sort of strange that for someone who writes mostly stand alone stories, I'm juggling three different series at the same time. There are even some similarities between them.  For instance, both Plaything and Welcome to the Real World rely on flashbacks heavily. I think the big difference is in the circumstances and the dominant.

Penalty Princess - Feminization out of necessity, but some revenge satisfaction.
Plaything - Wicked dominant taking advantage of situation.
Welcome to the Real World - Loving forced feminization between a couple.

Plaything is one of my darker series.  In Out of the Frying Pan our hero finds himself at the mercy of his roommate's girlfriend and she's got plans for him whether he wants to go along with it or not.  This one has plenty of female domination, bondage and discipline, and some extreme humiliation, some of which involves other guys.  I think most of my readers will really enjoy this one.
Posted by Kylie at 8:56 PM No comments:

Welcome to the Real World Mistake 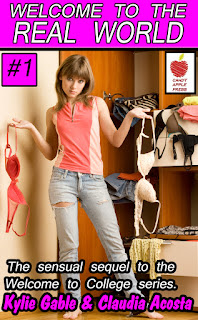 If you purchased Welcome to the Real World, I owe you an apology.  I accidentally uploaded a rough draft of the first 15% of the story or so.  I didn't catch it until late last night and it took Amazon about 15 hours to fix it.  If you go back to Amazon and download the story again, you won't have to pay for it and you'll be able to download the real story.  I apologize for the inconvenience.  I screwed that one up.

Welcome to the Real World 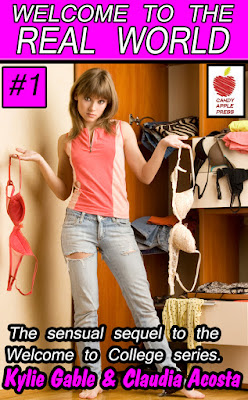 I don't think that I'm breaking completely new ground here, but I can't think of any other case in literature of an author writing a fictional sequel to a non-fiction memoirs.  Welcome to College was very well received and kind of put me on the map in forced feminization.  I hope that Welcome to the Real World will prove a worthy successor despite being fiction.

I've told the story here before, but it was a rather close call when we went through my mother's basement two years ago and I almost got busted for my college experiences a decade after they happened.  However, I've also realized that I've changed a lot since I began exploring feminization and female domination as an adult.  In a lot of ways, even the character of Kylie is no longer really me.  I think I would more openly embrace having a dominant woman in my life than Kylie does in this story.  However, there's definitely still a part of me that is that insecure about his kinks.  Whether Welcome to College is one of your favorite books or you never read it, I think you'll really enjoy Welcome to the Real World.

"Wow, you are tense” she exclaimed, as she pressed her thumbs into the muscles at the base of my neck. “I can feel it in your muscles; you really need to try to relax. Okay, try to loosen up for me, close your eyes and lean back, let your neck go all floppy.” She pulled be back off the table, and then held my head in both hands rolling it around and around as I tried to relax my neck muscles. “Drop your arms down and gently arch your shoulders back.”


I put down the glass and did as I was told. I did begin to feel much more relaxed.
“That’s it, let go of all that tension, let it flow out of you." She crooned.
Claire knew just how to knead all those small muscles in the neck and shoulders; she ran her hands down my arms shaking them gently as she went. She held my wrists in her hands and pulled my arms back behind me crossing the wrists and pulling up gently, slightly straining the triceps. My eyes were closed and I was breathing deeply, probably mere seconds from falling asleep.
Suddenly I heard a very familiar laugh and the word ‘Gotcha!’ was whispered in my ear. Before I had even processed what I’d heard I felt something slipped over my crossed wrists and then tightened. Clarity came blindingly fast but too late, Claire had zip tied my hands together behind my back. With hardly a pause I felt my arms pulled back and down as she attached another one to the lower back of the chair.
"What the Hell? I'm not in the mood for this Claire."
However she wasn’t listening and wasted no time debating my moods. She was already attaching each of my ankles to the front legs of the chair. I think that I was sluggish in my reactions because of the way she had lulled me into relaxing, but before I’d even thought about resisting it was already too late.
"Be quiet for once will you? I have some work to do." She snapped at me.
"Wh… why are you doing this?"
"For Beth of course, why else?" she asked rhetorically. "She’s my best and closest friend as you know. Well, we had a long talk about you this week, while you were away."
"Be--" I abruptly began to yell, startling her, but her reactions were much better than mine, instantly clapping a hand over my mouth effectively silencing me.
"No no no, you can't be yelling out like that. You’ll disturb the neighbors." She admonished, “Which you don’t want to do.” I disagreed with her as to me it seemed an excellent idea. With her right hand clamped tightly over my mouth and despite my vigorous attempts to shake it off, she managed to stretch until she could grab her purse strap with her left hand. Reaching inside the bag, she rummaged around before pulling out an object that I recognized only too well, a black penis gag.
"Now, you can shout." She smiled, amused.
I clamped my mouth shut and firmly pressed my lips together. She simply released my mouth and moved her hand up to pinch my nostrils closed. It’s actually strange but if somebody grips your nose in order to get you to open your mouth, you know you will eventually lose, but it seems that I at least, stupidly resolved to fight for as long as possible. I yanked my head about while trying to grab a breath through my nose. The futility of my actions was entirely lost on me but not Clare, she viciously grasped my nose restricting most movements of my head and continuously stabbed the gag at my mouth; all the while giggling as if she’d discovered a great new game. Inevitably I had to eventually open my mouth, I couldn’t hold my breath any longer and was beginning to see dots. Immediately in went the gag right to the back of my mouth then the straps were pulled tight around my head.
"Beth wanted me to bring over a ball gag, but somehow I thought this would be much more appropriate, considering the circumstances. Now let's get you finished off," she continued chatting conversationally as I glared poisoned daggers at her. If looks could kill she’d have been nothing more than a small pile of cinders on the floor. Unfortunately she simply continued going about her business as if there was nothing wrong or unusual, and tying up your best friend's fiancée in his own kitchen was the most normal thing in the world. Moving back to the table she opened a plastic hardware store bag and pulled out a coil of rope, bending me forward she looped the rope twice around my chest before tying it off behind me. Then pushing me forcefully back against the chair back and ran the rope around the back of the chair, then around me again a few times, holding me immovably in place.