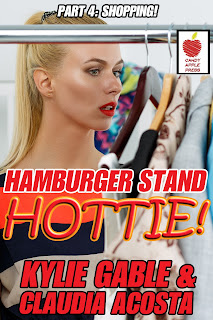 Well, after a brief interruption for the Halloween themed Night of the Cat, Hamburger Stand Hottie has returned with the sizzling hot part 4. I've written a great deal of shopping scenes before, but somehow it's very different when the mistress's mom is along and armed with a purse full of platinum cards. Randy knows he's in for it and the two dominant women set about finding not only the perfect date outfit for him, but an everyday wardrobe for other times he needs to dress up.  It's one humiliating day for Randy and one very exciting one for Olivia.

The Night of the Cat 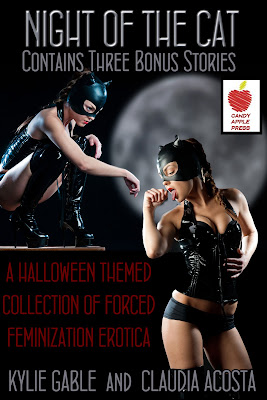 The Night of The Cat is a Halloween themed story of a dominant woman who has a little wicked fun every year at Halloween. She picks up a guy, convinces him to wear a costume identical to hers, and then sets in motion a plan to trap and humiliate him.

The book itself is a collection of four Halloween themed stories. In addition to the Night of the Cat are the following:

Bambi and Thumper is the story of two boys who find themselves forcibly crossdressed and forced to fill their Halloween pumpkins with candy if they want to be allowed to change back to their male clothes.

Finally, we have The Jaguar's Halloween. Those of you familiar with my writing will know that The Jaguar is a masked vigilante whose weapon of choice is forced feminization. In this short story, she tries to save a little girl's Halloween from her selfish father.

I think you'll find this collection just the one to titillate and excite you and maybe even scare you a little bit this Halloween season. I had a great time writing these stories and I hope that they’ll make this holiday a bit more exciting for you.
Posted by Kylie at 1:09 PM No comments: 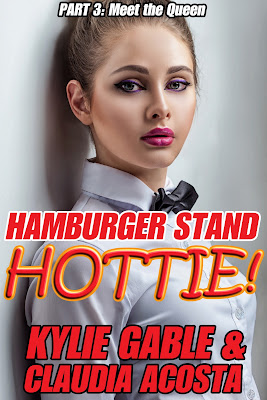 This series was supposed to be four books about a teen who was being forced by a girl to take her place as a waitress. It didn't work out that way.  With Olivia's mom suddenly becoming an important part of the series, it's become a six book series that does still have the original story, but has something else going on to as it has become a sort of coming of age story too.  I think it's going quite well and it's some of my best writing.

The sales started out a bit slow on the series, but have definitely sped up recently.  I'm hoping that trend will continue because I think book three and four are the best part so far.  Don't take my word for it though.  Here's an excerpt:


Randy tried not to think aboutthis latest humiliation too much. He was busy enough taking orders and doing his job. He still hated the thought that he would get further spankings tonight. He didn't even think about Jordan for another hour before Mia told him that she had heard all about their conversation from Jordan. He was definitely smitten with her.
"I'm only doing what you told me to," said Randy. "That doesn't mean I have to like it."
"How are you going to feel when he's kissing you?" asked Mia. She then started laughing right in his face when she saw him blushing at the suggestion.
Thanks to the large party, Randy had successfully met his quota. Olivia would be getting her money and hopefully she would be staying off his back and even more importantly off his butt. Unfortunately, this thing with Jordan was a new obstacle and a new burden he'd have to deal with. The restaurant was closed and Randy just wanted to get home now.
"I will do what I have to do, but I just think trying to make us boyfriend and girlfriend is so wrong."
"Maybe, but you'll do what Olivia tells you to do, right?"
"Yeah, I guess so," replied Randy.
"Then before you go, you need to go talk to Jordan. I gave him a few suggestions for possible dates."
"You didn't."
"I kind of did," smirked Mia.
"Aw Hell," moaned Randy.
"Hey girls," said Jordan.
"Well there he is now," replied Mia.
"Excuse me?" asked Jordan.
"Oh, we were just talking about you," replied Mia.
"I hope you don't mind," said Randy.
"No, not at all. Just so you were saying good things."
"Oh, she was saying some very good things," replied Mia. "Have you two decided where you're going to go for the big date?"
"Well, I liked your suggestion about Caprice and then maybe dancing," replied Jordan. "I mean if that's alright with Sandy."
"Oh what girl wouldn't want to go to a fancy French restaurant like Caprice.  I'd even go with you if she turned you down."
"I sure would," said Giana stepping out of the kitchen.
"That would be fine, thank you," replied Randy before noticing he was getting a stink eye from Mia. "I mean, I'm just happy to get to spend some time with you.  He stepped forward and kissed his coworker on the lips. Jordan blushed profusely wondering who else saw this hot girl kissing him. Mia smiled to herself. Things were going better than even she imagined.
"Aw, that was so romantic," said Giana. "I told you that you'd meet somebody, Sandy."
"Frank's is not paying you all to stand around," said Melanie. "Let's close so that we can all go home."
"Sure Melanie," said Randy. He didn't much want to be done because that meant facing Olivia, but at least he had made the money she demanded.
Posted by Kylie at 8:37 PM No comments: 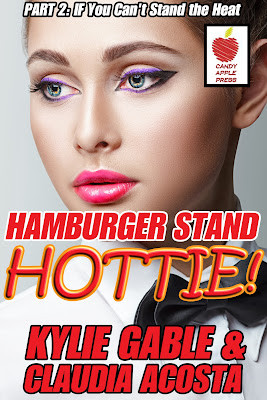 I've been very busy writing this week.  Not only did Claudia and I continue our Hamburger Stand Hottie series, but we also completed a special extra book for Halloween. I think you'll like it.   I've been so busy though that I forgot to update my blog.

My job here is to sell you a book or in this case a series, but frankly this is some of my best work and it goes in a direction that I have never gone before. Sometimes characters refuse to do what I want them to and as a writer I love it, but I've never had a character I wasn't planning to use force their way into a story before.

Randy is now working at the restaurant as a feminized waitress, but ends his first night with only $10 in tips. He soon learns that there is a big cost for disappointing Olivia. Even worse, he's managed to disappoint his father who can't understand why Randy is unable or unwilling to work his hours at the job he found for him. This story contains feminization, female domination, and bondage as our frightened sissy finds himself forced to become a waitress.

"I was worried your parents might answer," confessed Randy.

"And what if they had? I still work at Frank's as far as they're concerned. You're simply my coworker. No problems," scoffed Olivia. "Now where you do have a problem is tips. I assume the $10 is all that you made for me?"

"You were my only other customers and you didn't tip me," complained Randy.

"Watch it Sissy," warned Olivia as she raised her eyebrow, "it sounds like you're trying to blame me."

“Alright, go up to my room and strip down to your underwear."

Randy put his head down and climbed the stairs up to her bedroom. It was only now that he was climbing that he remembered just how much his legs were killing him.

Standing in the middle of Olivia's room, he felt so exposed as he stripped off his uniform down to just his bra, panties, and stockings. He decided that he had better keep his heels on, but he wasn't sure if he'd get in trouble for removing them or not.

When Olivia entered the room, she looked different. She actually looked amazing. She was wearing a black corset and a black leather skirt. She had put her hair up and her makeup was much heavier than it had been. On her feet were a pair of black leather boots that went up to her knees and had four inch spiked heels.

"Get on your knees bitch and present me with my money," commanded Olivia. Randy dropped to the floor and attempted to hand it to her.

"No, hold both of your hands in front of you and place the money in your outstretched palms as an offering to your Goddess."

Randy felt silly, but he attempted to obey. Olivia picked up the ten dollar bill and sneered at Alexander Hamilton with a contempt worthy of Aaron Burr—the man who shot Hamilton in a duel.

"You saw what I was doing. I gave them great service and I flirted more than ninety-nine percent of the waitresses I've ever had," whined Randy.

"Silence! I don't want your excuses, I want my money. You will have to be punished for disappointing me."

"If you’re not sorry now, you're certainly going to be. Now, lay your disgusting body down on your stomach," demanded Olivia.

As soon as Randy complied, she made him stretch his arms towards the headboard, where she had already attached leather restraints. She deftly secured his wrists in the bands she quickly tightened, leaving him helpless. Then, she pulled
Randy's panties down to his knees and secured his ankles to the foot of the bed. This was something new and it frightened him.

"Feeling kind of vulnerable?" she asked in a mocking tone, as she kneaded his soft hairless ass with her hands. They were surprisingly strong for a girl of her size, but they were still delicate and porcelain. These hands were the veterans of many manicures and spa treatments, but nary a minute of manual labor of any kind.

"Extremely," replied Randy nervously looking over his shoulder at the beautiful young woman who would soon begin punishing him.

"Good," replied Olivia holding up a black leather belt. "You should. I made my mother get this belt for me at Neiman Marcus. It's Prada and it cost over $400. I really like it, but I never really seem to find the right opportunity to wear it. Prada leather is amazing though. I love it.
Posted by Kylie at 7:49 PM No comments: