Feminized by his High School Bully 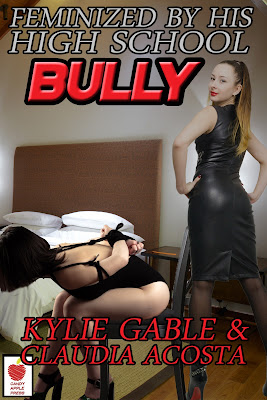 I'm back from my little vacation to Gen Con where I got some good ideas for future stories.  I had a great time and I can't say that I never did any writing during my week away, I did cut way down. I see a collection in the near future so that I can have another week off at home without deadline pressure.  The last thing before I left, however was to turn in Feminized by His High School Bully for editing.

High School reunions are a great time to humiliate a sissy.  Let's face it, reunions are all about impressing your former classmates with how you made it big.  What better time to force the poor sissy into socially humiliating situations. In this story, Mike finds himself back at his 10 year reunion only to find that Allison the girl who made his life a living Hell in high school is back and she intends to do more of the same to him at the reunion.

This is not a gentle story.  There's a lot of humiliation for the poor sissy who really doesn't deserve his fate.  He was just there at the wrong place and the wrong time and an evil woman decided to make him her target.


"I'll have a skinny latte with soy milk," he replied unsure if she was joking.

She took a cup and a permanent black marker. Taking off the cap, she prepared to write on his cup when a woman's voice called out from behind him in line.

"Put Britney on the cup. That's what she prefers to be called."

The barista laughed nervously as Mike turned around to see Allison Cain standing there. She wore a very fancy black leather trench coat. In her high heels, she was a good four inches taller than he was.

"You're here for the reunion too?" he asked hoping against hope that she wasn't.

"Wouldn't miss it for the world," she said. "I see you made it back too. I can't tell you how happy that makes me."

"Yeah, though looking at how you're dressed, it's almost like you feel you're a man now."

"I work on Madison Avenue," he replied defensively.

"Is that supposed to impress me or something? I've probably whipped your boss with my flogger," she smirked.

"What are you talking about?"

Turning to the barista, Allison placed her order for a caramel cappuccino and then, after Kimberly had written her name on the cup, she asked if she could borrow the marker.

"Sure, we have a ton of them," replied the helpful barista.

Mike had gone to sit down on a padded bench and Allison walked over to him. He didn't worry about what she was doing, although he reflexively dreaded her presence. Even as she undid the cap on the marker, Mike wasn't alarmed. It wasn't until she plopped down right on top of him, grabbing his cheeks between her left thumb and forefinger, that he became alarmed.

"Wha- are you -oing?" he asked, but he knew. This wasn't the first time she'd done this to him. Taking the permanent marker she drew a penis and balls on his right cheek. Even as she colored in her drawing, he could scarcely resist. When he did begin to pull away in earnest, she wrapped her legs around him, trapping his arms at his side.

Mike was blushing profusely aware that almost every eye in the place was now on them. He struggled to get her off of him, but he couldn't make her budge. Satisfied with her drawing, she reached into her purse and grabbed a bright red lipstick. She opened it and painted his lips a cherry red. She then took an eye shadow palette and, using her thumb, put bright blue eye shadow on his eye lids. When he saw Kimberly laughing at the scene, Mike became livid.

"Get off of me!" he demanded, trying once again to dislodge her.

"Just like old times isn't it, Britney?" Allison laughed wickedly. "That's what your whole reunion is going to be like. I can't wait to fuck with you."

"Order up for Britney," called out Kimberly. Dejectedly feeling the full brunt of humiliation on his shoulders such as he hadn't experienced in a decade, Mike Weaver got up from his seat and went to get his coffee.

"I'm sorry," said Kimberly. "It's just going to be easier for me to remember Britney now."
Posted by Kylie at 6:45 PM 2 comments: 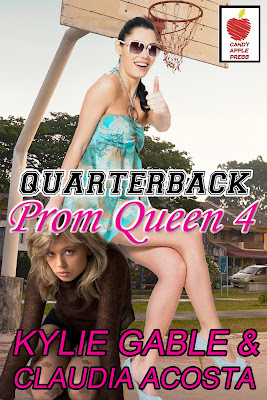 I'm a little late with this post because I've been really busy getting ready for a small vacation and I wrote a new story in case the next Welcome to the Real World isn't ready when I get back. It's a stand alone called Feminized by his High School Bully and you'll see it soon enough.  This week, the new book is Quarterback Prom Queen 4.

I had originally intended for this to be the last part of the series, but as I got writing it, I had one of those cool writer moments where the characters don't cooperate with me.  The girls at the school where Ryan was named Homecoming Queen didn't know he was a guy, but they were not happy to have an outsider come in and win and a group of them wanted revenge. It not only changed what I had for part for, but it changed the ending of part 5 too. 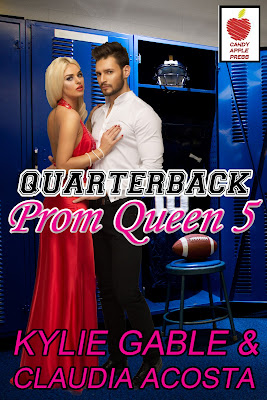 Speaking of Quarterback Prom Queen Part 5, it is the new ending of the series.  It's been written, editing, and it's available for preorder on Amazon now.  It'll come out on Friday the 18th.  I got several comments on the ending from my editor and beta readers so I definitely think you'll like it if you've been following this series.
Posted by Kylie at 7:50 PM No comments: 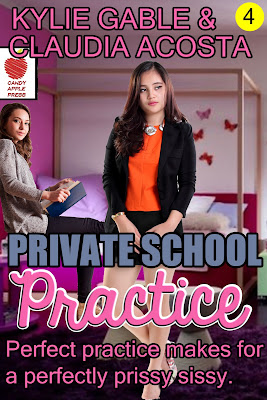 This may be the most sexually explicit book that I have ever written. Amazingly, the last book in the series Private School Passions was probably my previous high.  In Private School Practice, not only does Chase have a steamy sex scene with one of his captors, he has two of them and they're with a different girl than the one in the last book.

Of course there's still the matter of getting through his first day of classes as Hayley and the looming night out with the Chelsea's guy friends including Jim who seemed really smitten with Hayley the night they met, but Kelsey is determined to get him ready to play the greatest role of his life and she just can't resist Chase.

This has been my most successful series in a long time and I think it's definitely worth a read if you ever wondered what it would be like to be the feminized sex slave to a group of sexy girls.