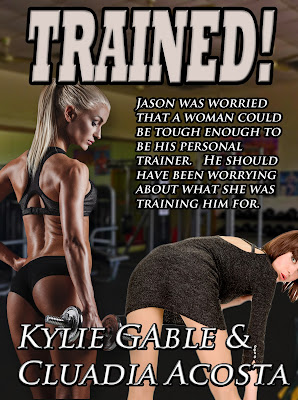 TRAINED! is one of those stories that sat in the back of my mind for months.  I think the idea first came to me in summer of 2014.  I've never had much luck putting a ton of muscle on my frame, but it's not from lack of trying.  When I got a job that paid me a decent wage, I hired a professional trainer.  At the gym where I was a member, there was really only one good trainer and she was a beautiful woman who also worked as a fitness model.

It was intimidating to work out with a beautiful woman who could obviously crush me, but being a submissive, I was quite enjoying it.  In fact, that submission dynamic worked out pretty well because she could be an absolute sadist. I realized that I would do anything she told me to do.

Trained! is the story of a macho guy named Jason who doesn't believe a female trainer could possibly be tough for him.  He learns the hard way, that Bianca is more than a match for him.  Rather that improving his strength she saps it.  Soon he's wearing women's workout wear and taking hormones while his wife is gaining strength and confidence working out with Bianca behind his back.  It all comes to a head in the most humiliating way for our hero.
Posted by Kylie at 5:35 PM 1 comment: 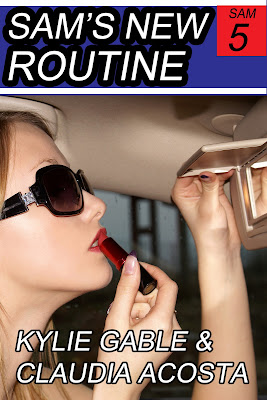 Amazon was really late in uploading my newest book, which means that Sam's New Routine got released on Valentines Day Night.  I guess that's appropriate enough.  I have already completed the series, at least in draft form and this is the penultimate (second to last) chapter.

Things have not been easy for Sam.  His step-sister and Alexis have had their schemes pay off amazingly well and he's now under their control and being more and more feminized in his own home.  Now, a new nemesis has appeared and even school won't be safe for our feminized hero.

Anybody who has ever watched a 13 episode season television dramas from The Sopranos to House of Cards will tell you that the second to last episode is always intense.  Sam's New Routine is no exception.  I highly recommend it for lovers of forced feminization.
Posted by Kylie at 7:59 PM 3 comments: