The Mask of the Jaguar 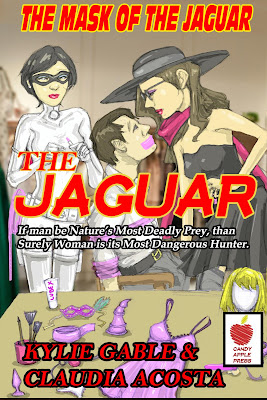 I've never put out a second edition before.  You'll notice that I'm closing in on 150 books published if you look at Amazon and though I have some reprints in there, there are no second editions. So why did I do it with The Mask of the Jaguar?

First, when the original book came out in 2014, it was acclaimed. Prolific reviewer Caged Mitch said, "This story was a lot of fun for me. It's inventive and new, in a genre that doesn't see a great deal of originality."

Bending the Bookshelf said, "This was a fantastic short story that's more about the transformation itself than the consequences of being transformed, and more about the delivery of justice than the act of humiliation."

The other reviews on both Amazon and Goodreads were equally flattering and helped me decide to write two new Jaguar stories, but since Mask came out, I met incredibly talented feminization artist Anabelle Brito. Brito's art is amazing and I really wanted the first Jaguar book to be graced with her art as well.

She prepared seven new pieces of art for The Mask of the Jaguar book as well as the cover. I also rewrote a few parts where the book was week.  The result was a book that even people who bought the first edition would find exciting and enticing.  The book is currently in the adult dungeon, which makes it hard to find on Amazon so please follow the link. You'll be glad you did.