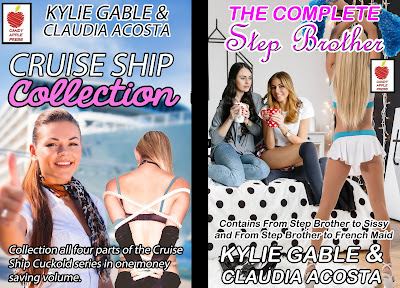 As you know, since spring we've been putting out a new book every week.  Well, with me extra busy with some side writing and Claudia unfortunately in the path of Hurricane Irma, we're a little behind on the next installment of Private School Prisoner.  We're about 60% done and it'll be ready either next week or the following week, but I decided it was time for me to do the equivalent of a clip show.

The Cruise Ship Collection contains all four books in the Cruise Ship Cuckolds story.  It's a little earlier after the end of the series than I normally like to put out a collection, but it was a victim of 2016 -- the year of too many concurrent series.  The first part came out December 31st of 2016.

It's the story of two couples who go on a cruise together.  What the guys don't realize is that they will be spending the cruise under the watchful guidance of Mistress Andrea and her charges who will feminize them and begin their training to be feminized cuckolds.  The wives for their part, have arranged for a pair of studs to join them on the cruise and keep them company while their husbands are feminized.  It's all my usual feminization, domination, and humiliation, with a bit of cuckolding thrown in.

The Complete Step Brother combines From Step Brother to Sissy and From Step Brother to French Maid into one volume.  I've done a number of these two part series going back to Summer Reunion. They make great little collections for those people who like a slightly longer story. At 15,000 words I won't pretend its War and Peace, but it is roughly the same size as a lot of  $3.99 erotica.

When Roger returns from soccer practice, he finds himself falling into an elaborate trap set by his own step sister Maria. With the help of a hidden camera, she tricks him into blindfolding and handcuffing himself to a pole in the basement while wearing women's clothing. When the blindfold is finally removed, he discovers that he is now at the mercy of not only his step sister, but her friends as well. Now Maria intends to make sure he never escapes her web.