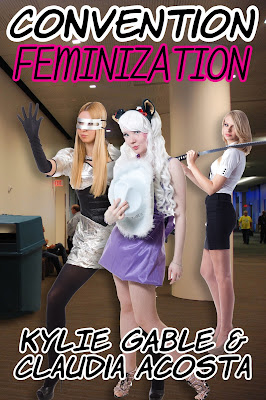 Geek has become chic.  I've been immersed in various nerd hobbies as long as I can remember and I've been going to conventions for almost that long.  I remember when a plain looking woman at some of the gaming or comic conventions I went to was a cause for astonishment.  Now, women are becoming much more common.

Unfortunately, that also means that sexism has become a lot more common as well as a push back.  It all seemed to come to a head last year.  Convention Feminization is the story of two guys who go by the names of Koss and Darkside.  Koss is a blogger while Darkside is a podcaster and both have taken it upon themselves to make life difficult for female nerds.

Unfortunately, for these two it puts them on a collision course with four resourceful women who have decided to teach them a lesson once and for all.  If being forced to wear a dress in public can be embarrassing, just imagine how humiliating it would be to wear some of the outfits cosplayers squeeze into.

This is a project that's very close to my heart because of my own background and both the feminized men and the women who dominate them are based on people I have gotten to know playing games and reading comic books myself.  This is the first part of a two part story and one that I think will definitely titillate fans of my writing.
Posted by Kylie at 9:09 PM