This Blog will Return to Life 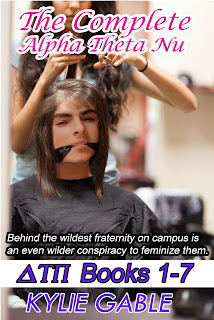 [I need to apologize right off the bat about the lack of blog updates.  I just find myself so busy lately.  I will be making some changes to my writing schedule among other things to try and gain some time]

I've just released a collection that puts all seven books in my Boys of Alpha Theta Nu series into one 50,000 word (Okay 48,500) bundle.  I'm really proud of my series because it was very different from most of what's out in the genre and definitely not like anything I had written before.

To begin with, the women aren't nice.  Sure, some of them come around by the end and a few are misunderstood, but they just aren't who you root for in this story.  That's a big change for me in my stories where most of the time they guy clearly deserves his fate.   This time around, Matt is probably the most decent guy in the story.

Even, Doctor Shepherd who has appeared as a student in the Welcome to College books and then later as a professor in stories like French Exchange and Calendar Girl comes off negatively.  She's a first year college professor who wants to be taken seriously despite being young and hot.

I tried to writ this story as a forced feminization X-Files.  There's a dark conspiracy unfolding and like a comic book or an old movie serial, each chapter creates a new problem for Matt and his friends to solve, but there is still an over-arching conspiracy lurking  hanging over his head.