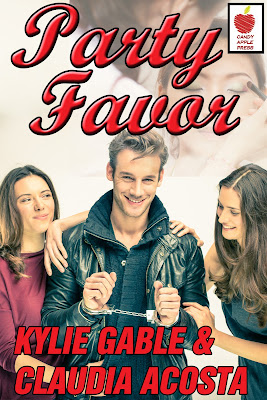 I enjoy writing a large variety of stories about forced feminization.  There are a lot of tropes and cliches in this genre and I try and bring something new to the table.  Party Favor is definitely one of my most intense stories yet. There is a lot of forced cum eating in this one.
With his girlfriend away for the weekend, Andrew plans to eat a lot of junk food and get some work done. He can't believe his good fortune when two beautiful young women appear at his door seeking a phone and shelter from the rain. What he gets is a wild ride that will forever change him.

In this 10,000 word cautionary tale for anybody who might find themselves alone and vulnerable should a pair of women like these two decide to prey on them, Andrew soon finds himself the guest of honor at a rent party being thrown in his own home. This is not a sweet story and contains shocking content! Do no purchase if you are offended by bondage, female domination, humiliation, forced feminization, crossdressing, and forced bi.

Taking a bottle of bright red nail polish the two girls carefully painted his toenails while his feet were bound tightly to the foot of the bed. Then with a bit more difficulty as he tried to resist, they managed to do the same with his fingernails. They did this by untying one arm at a time, leaving the other bound to the headboard. Then forcing him to extend it flat on the bed, one of them would kneel on his arm while leaning on the back of his hand, pressing it down on top of a large book. He couldn’t move his arm or hand as they took turns painting his nails. Once his toes had dried they worked a pair of Allison's sheer pantyhose up his legs to his hips, playfully snapping the elastic band around his waist.

"I'll say she does. They're going to look so sexy wrapped around some lucky guy tonight" agreed Lucy. Andrew groaned audibly but was no longer putting up any resistance, he simply lay passively as all his earlier struggles had been in vain.

"That's it little Angela" said Olivia. "Just lay back and let your Aunties take care of you."

Lucy slid a pair of black lace panties up Andrew's legs and then a pair of Allison’s strappy heels was placed on his feet. Allison's shoes were a little tight on him but he could just about get his feet into them. Olivia tied his ankles very securely together because they were going to have to be very careful with his arms if they were going to get a bra and dress on him and they weren't convinced by his passivity.

Sure enough, as soon as his wrists were free he made a grab for the stocking holding his ankles together. Olivia reacted by slapping him hard across the face, instantly stopping him in his tracks, he looked up as she stared him in the eye barking sternly at him "No! Now be a good girl, Angela. We don't want to hurt you."

The force of Olivia's blow was more startling than painful, but it was her forceful attitude that started the tears rolling down Andrew's cheeks. Lucy held him close to her breasts, rocking him back and forth as if comforting a newborn. While she was soothing him, Olivia quickly strapped a padded bra around his chest and then added a black lace dress over it. He now felt so humiliated not only to be wearing the sexiest dress that his girlfriend owned, which incidentally fit him perfectly, but also to be so easily cowed by the beautiful Olivia.

Next the girls lead him over to the vanity, where his wrists were again tied behind his back so that he wouldn't interfere while Lucy did his makeup. She was clearly trying to make him look sexy, even wanton with bright red lips, long black eye lashes and smoky eyelids. Olivia took Allison's favorite perfume and absolutely doused him in it. No woman would ever put that much perfume on, but there wasn't really anything Andrew could do about it.

"Wow, I think you’ve made our little girl look all grown up" said Olivia.