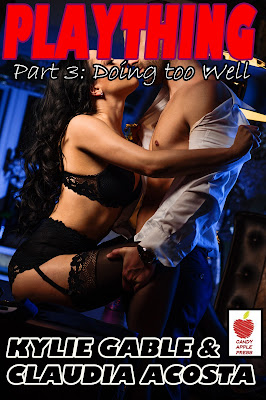 The third installment of my series Plaything is out. now.  This one looks at the unusual question of what happens when you follow your mistress’s orders too well.

In Plaything 3: Doing Too Well Tina has decided to play a prank on her boyfriend Todd. She decides that it would be hysterical to dress up his roommate Jason in lingerie and have him try to seduce Todd while she watches on hidden camera and records the whole thing.  When Todd likes what he sees, Tina flies into a range and punishes both boys for what she sees as a grievous betrayal.

Later, a Skype call to Jason’s old mistresses reveals a bit more than Tina would have wanted.  Have they finally realized what’s going on and what will they do about it?  Is there any hope for Jason to get away from his new tormentor?
Posted by Kylie at 6:26 PM