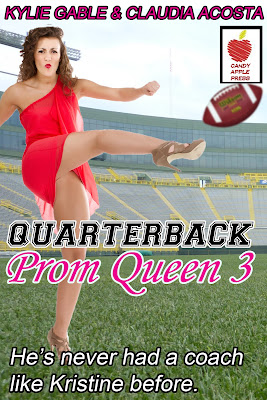 I've been really excited by the sales of this series and I really think that this format of a book where all the parts come out in consecutive weeks might be something that really works for me.  Sales on QPQ #1 started kind of disappointing.  However, QPQ#2 sold 160% what the first story sold in it's initial week.  That never happens with series.  I hope that 75% of the readers follow the story and I'm happy with 60%.

In it's first half week, Quarterback Prom Queen #3 is now on pace to sell more than QPQ#2 sold in it's first week.  Also, with each successive book, the sales on the previous books in the series get a nudge.  The real weird thing is two people bought the second story without ever buying the first one. Sales are strong enough that I may adjust to this way of putting out series if you prefer this to waiting very long for the next book in the series.

I don't know what to say about this book that I haven't already said about the previous two books in the series except that it doesn't get any easier for Ryan. Not only do his sister and her friends make him do cheers for them complete with cheerleading uniform, but he's left to explain his feminine hairstyle and newly blonde hair to his parents. Just when he thinks it can't get any worse, Kristine brings back a face from Ryan's past to further torment him.
Posted by Kylie at 5:40 PM