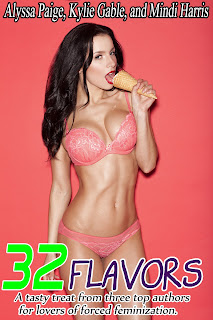 If you enjoyed our Thirty-Two Flavors writer round robin story in this very blog, I'm happy to announce that it's now available at Amazon.com and it will be available at other eBook retailers in a matter of days.  It was a thrill for me to work with such talented writers as Alyssa Paige and Mindi Harris and I think we've crafted something really special here by rotating short five hundred word segments through the book.

32 Flavors tells the story of Kevin Kane--a wealthy but arrogant jerk whose descent into feminization and humiliation comes at the hands of a girl named Tina who works in a local  ice cream parlor. She soon teaches him that not everything has a price as he gets tangled in her web and must obey her every whim if he is to escape with his reputation and dignity in tact. I have always enjoyed putting multiple short stories with a theme together into one single volume.  In The Crime and Punishment Collection, we look at men who made the mistake of getting on the wrong side of a creative and powerful woman and learned there was a price to be for such bad judgement and that price begins with total emasculation.  This collection contains three previously published stories in Sissy-in-Law, Trial of a Feminizer, and It's Nothing Personal for $4.99 and is available for pre-order now.  It will be released on August 1st.