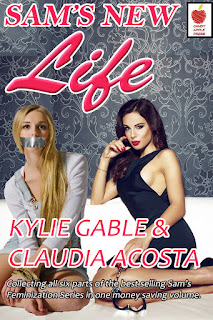 One thing I like about writing series is that when I put them together like I did with Welcome to College and The Boys of Alpha Theta Nu is that when I put them together, I feel like I've accomplished something like writing a novel.  This week my new book is Sam's New Life, which is a 51,000+ word story of a guy named Sam who makes the mistake of messing with his step-sister and her beautiful friends one time to many.  The result is his utter humiliation, feminization, and subjugation at their hands.

The story begins with Halloween of Sam's senior year of high school and continues through the spring as the girls change his life forever.  This story has it all from humiliation, bondage, and female domination, to humor and romance.  This may be the best ending I have ever written and the feedback I have gotten from so many readers has been that this is one of their favorites.  I hope it will be yours too.

"What do you think you're doing, Sam?" Alexis shouted at me.

"What? I'm out on a date with a guy, for Christ's sake," I replied annoyed.

"You're out on a date with a guy who is going to be shelling out over $100 for your part of this meal. Do you think he's paying for polite conversation?" She snapped.

"Kiss him, pet him, show him a good time. Give him something in return."

"What does that have to do with anything?" she gave me a puzzled look.

"Hello, if I'm not gay why would I be flirting and making out with another guy?"

"Well maybe because you know what will happen to you if you don’t!"

“Let’s not go there again, the possibilities are practically endless. You know I have so much stuff on you little sister, I can very easily ruin you, your reputation, your whole life. Then if I were to let slip something to Ryan, probably your health, definitely your face. Look, I don’t want to keep repeating this same discussion with you every time you don't want to do something I tell you to. It should be very apparent to you by this point that you want... no, actually you need to keep me and my friends very happy. You can do that by doing what we’ve told you, exactly what we’ve told you. If you don't? Well, that’s up to you I suppose.” She spoke quietly, clearly and very ominously.

“And what would he do to you? You set all this up, claiming I was your cousin!” I retorted desperately.

“Much as he wouldn’t get rough with you while he thinks you are a girl, I really don’t see him holding back much when he finds out you’re just a sissy boy, do you? As for me, I was still a girl the last time I looked. So although he may be upset with me, he probably won’t rearrange my face.”

She was right and I knew it. She had me and there was nothing I could do.

"So, what do you want me to do,” I capitulated. “I've already kissed him and everything."

"Oh you'll be kissing him a lot more and much better than that. When we get back out there start by holding his hand."

"And you’d better start to show some real enthusiasm, rub your legs against his under the table, lean into him more and for Christ’s sake look at him! Oh, and stop talking to Joey, he’s not your date."

“None of your business! And you’ll pay for that later.” She retorted.

"We just did," she replied. "Now touch up your makeup and no more backchat!"

After we’d touched up and checked each other we walked back out to the boys at the table. I noticed a lot of guys in the restaurant, some much older, checking us out as we did. As if reading my mind, Alexis whispered to me, "I'm wearing pants. It's you they're staring at."