The Jaguar: The City of Fire and Rage 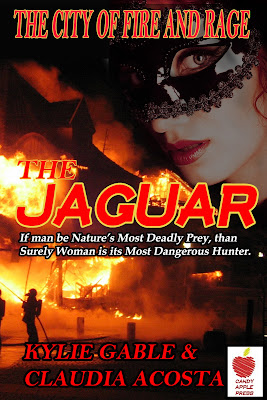 The Jaguar first appeared in a segment of a story by me on Fictionmania over a decade ago.  That story fragment got incorporated into the story The Mask of the Jaguar in 2014.  It didn't sell very well.  I mean it wasn't a phenomenal failure or anything, but it had issues:

1. I had all sorts of problems with the track changes feature on Word and I literally had to resubmit the file four times before I finally got the right one.
2. The cover was a bit ambiguous and didn't really say Forced Feminization
3. It was a rather out there concept with a pulp style vigilante who feminized her prey.

The problem was, it was one of my favorite stories.  Not only that, but my editors universally loved it.  I decided to do the unthinkable--I wrote a sequel.  Not only did I do a second Jaguar book, but I had Annabelle Brito illustrate it.  She drew and inked four great pictures and did character sketches as well. 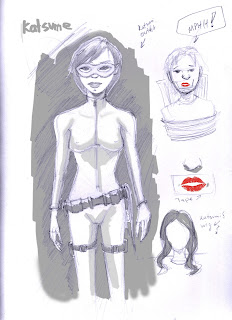 So now that I've filled you in on why publishing this book was a silly idea let me tell you about The Jaguar: The City of Fire and Rage.  The Jaguar is based on pulp heroes like The Spider and The Shadow. She is a vigilante, but she doesn't get involved in the big stuff like world domination and serial killers.  With her partner Katsumi she avenges women against sexist bosses and abusive boyfriends using forced feminization.  This time it's a depressed town where the LGBT community is under attack. It's over 13,000 words of pulp action with plenty of forced feminization, female domination, bondage, and two tough women kicking ass.

He stumbled out of the shower patting himself with the towel, disconcerted by the newfound smoothness of his hairless skin and trying not to make it worse by rubbing with the towel. Katsumi led him over to a part of the warehouse where Sheila was waiting at a vanity table. She’d already laid out an outfit for him to wear but Jack wasn't aware of it, he was much too focused on the figure of the Jaguar imperiously beckoning him towards a vanity table and pointing peremptorily at the swivel chair that was in front of the table. "Sit!" She ordered. "We have a lot to get done and a limited time in which to do it."

Jack immediately sat on a small white chair in front of a large vanity mirror that was surrounded by lots of light bulbs. Katsumi grasped him by the shoulder and spun him in the chair so that he was facing her. She was in fact, a very skilled makeup artist in addition to her many other talents. His countenance displayed a new sense of worry as with steely eyed determination she plucked his eyebrows into very thin arches and began applying a liquid foundation to his face. With a critical eye she carefully studied the canvas that was his face, his facial features were neither balanced nor harmonious, and it was obvious that he would never be made into a great beauty, despite all of Katsumi’s best efforts. However she was sure that she could make a difference, his eyes began to pop with just a bit of shadow bringing out their emerald hue. A bit of blush and some careful shading gave him some quite prominent cheekbones and managed to hide much of his nose; after some plumping and redefining he even began to display some seriously kissable lips. All the while Jack sat motionless, absolutely fascinated by the transformation taking place in the mirror, even as it disturbed him, realizing that it was him being transformed, still he couldn’t move. Eventually Katsumi declared her facial work complete and moved aside, leaving Sheila to work on his hair while she proceeded to give him very long, very pink, gel nails with tiny ivory white hearts in the middle.

Hair never came easy to Sheila, she could style her own hair well enough, but when it came to doing an even semi-professional job on someone else, she had to work hard and study it with the same tenacity that she’d used to learn Brazilian jiu-jitsu, kyusho-jitsu, and boxing. She’d had to patiently dedicate herself to acquiring all the skills that The Jaguar needed, which meant that because of the long hours spent training she’d now become an expert at a great many varied skill sets.
Posted by Kylie at 8:40 PM