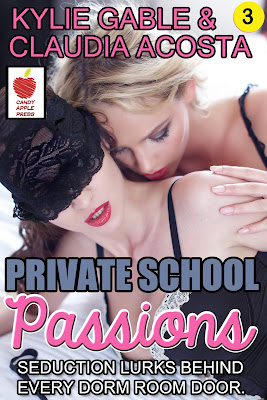 The elephant in the room...

In the Private School series, I try to tackle this head on.  Yes, there is potential for sexual satisfaction in the situation, but Chase still doesn't think it's a great deal for having to spend the next year of his life convincing everybody that he's Hayley. Chelsea might be one of the sexiest women he's ever laid eyes on, but still doesn't think being tied to a bed and pegged is his idea of a fun night under the sheets.

In Private School Passions, Chase gets to know Reina. The quite girl is actually turned on by his dressing and when she sees him passing on campus, it's almost too much for her. When they come back to the dorm room after English lit, this book gets steamy.  Of course, it's also not without many humiliations for our hero(ine) along the way.
Posted by Kylie at 12:28 PM