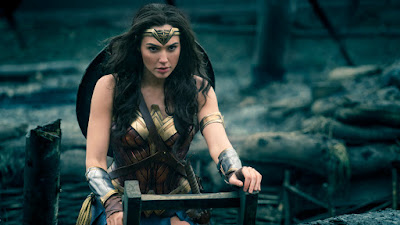 I really loved this movie and to some degree, I'm not quite sure why.  I mean I know it was a great action movie, but it was more powerful than that.  A lot of people seemed to feel that way.  I couldn't help but marvel at the scene on the beach where the Amazons fought the Nazis and the scene where Diana goes into no man's land.  Both scenes felt like something new and I suppose the beach scene was, but there have been amazing action heroines going back at least as far as Emma Peel.  Still, I really felt like I was seeing something for the first time and that's great considering how many superhero movies there have been this decade. It's awesome to see such a powerful kick ass woman.

The acting was great.  Gal Godot was perfect as Wonder Woman, while I really liked Robin Wright as Antiope was pretty brilliant as well. I have just binged House of Cards Season 5 and so it was fun to see her in a different role. All in all a great four and a half star film.

One thing struck me about my own writing while watching the movie.  A lot of superheroines have dark origins. Superheroes were being deconstructed very shortly after women began appearing in more comics. They recovered from rape or the murder of their children rather than Superman just doing what he does because he could and it's the right thing to do.  This Wonder Woman comes to man's world for that very reason.

When I created the Jaguar, my origin plans for her were a lot like Veronica Mars.  I had even started writing the origin story beginning with her in the shower after just being gang raped. Then I thought about it more and it didn't work for me. It was too dark for her method of payback.  You raped me, so now you have to wear makeup?  No.  This side effect of this change is that she became somebody with the skills to do something about a bad situation and the type of hero to use those skills.  She becomes the Jaguar to help her friends and I'm pretty proud of that. 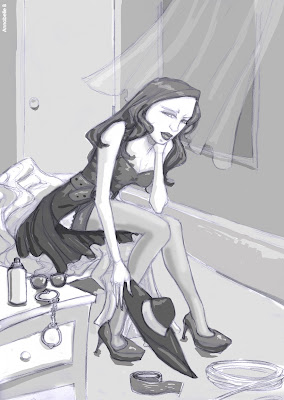 "So, you're going to do this again?"
"I'm not going out and taking on a serial killer or the mob, but if I can help out other women who may be getting the short end of the stick, then I'm going to go for it."
"That's actually kind of cool," said Mae. "The Jaguar strikes again."