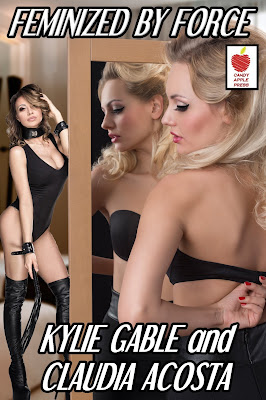 I'll admit it, collections like this are a devious plan on my part  to keep something new coming out every week even when I don't have a new book written.  It's  been a rough month and a half. There's  been a lot going on and I have fallen behind a bit. I did  not want the quality to suffer, so I decided it was time for a  skip  week.

Feminized by Force has four great stories in here at a  money saving price, so if you missed even 2 of them, it's a  win-win. I have a new three part series that's beginning next week and I think it's wonderful (big surprise  there).  However, until that comes out, enjoy this wonderful mini-collection.

Dressing Room Dupe: Is the story of a Christmas shopper buying a dress for his girlfriend who is mistaken for a sissy shopping for himself. He is feminized by the women at the clothing store and many of the women at the mall on Christmas Eve night.Panties and Briefs: Law school can be very competitive, but when a law student tries to drug his main competition to make her miss a test, she gets him back with revenge of a feminization kind.Feminized by Lady Luck: A stunning woman operates her own casino and men who lose at games of chance have to pay up one way or another. In this case, she pimps him out to pay back his debt.The Sorority Bitches: A college freshman and his roommate miss with the wrong sorority girls and learn a lesson they'll never forget.Four stories with over 30,000 words for only $4.99! If you love forced feminization, female domination, or bondage and humiliation--I hope you'll give this one a  try.