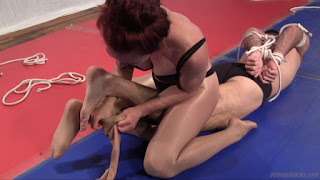 There is a new video out from Doom Maidens that I thought would be greatly enjoyed by many followers of this blog.  I posted once about VeVe Lane before, but she is an amazing wrestler who added bondage to her wrestling repertoire.  She's the originator and undisputed master of bondage wrestling.  There are very women who could wrestle a semi-skilled man and so overpower him that she is capable of binding him.  VeVe is at the top of this exclusive list.

In her new video, Tied Up, Dressed Up she not only defeats Howl, her male opponent, and  she skillfully hogties him, but using a series of temporary ties, manages to feminize him against his will as well. 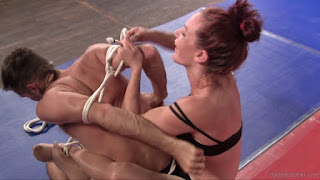 The best session wrestlers can dominate a guy pretty well---Miss Scorpion and Venom from the UK come to mind as does Ashley Wildcat from Chicago.  I've talked to a lot of female wrestlers on Twitter and found them to be the most amazing people.  I can't believe how supportive Amethyst Hammerfist has been of my writing and she is a total bad ass too.  Veve, however is something different.  She's powerful for her size, skilled in several fighting disciplines, and can tie a guy up like nobody's business.  This is not a video where the guy just lays there and lets the woman tie him up and dress him, it's a fierce competitive match that ends with Howl's inevitable downfall.  I've got about a dozen VeVe Lane videos and this one is far and away my favorite.  I can't recommend Tied Up, Dressed Up enough. 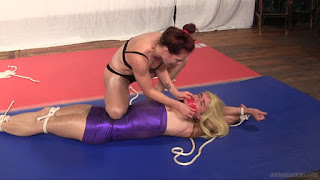