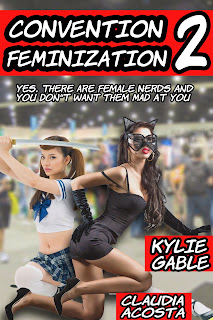 Today I released the second and final part of the Convention Feminization series. The two part story is an oddity.  I've written series as long as 10 books, but I've only done one other two-part story and that was Summer Reunion.  I almost made Hoops a two-parter, but it was a slower developing story and part one would have been all setup so there was no choice, but to put both parts together.

Convention Feminization had only been a one-part story, but as I neared the end of book one, I realized that I wanted the luxury to take my time with the punishment of the two misogynists whose capture had filled most of the pages of book one.

Book two begins with Koss and Darkside fully in the girls' grasp and about to endure a gauntlet of humiliating and emasculating tasks to avoid being exposed to their fellow fan boys.  If you love public humiliation with your feminization and sissies who really deserve the comeuppance they get, this one is for you.