The 12 Best Forced Feminization eBooks of 2015

To commemorate 2015, I thought I would post my list of the top forced feminization stories from last year.  Before I give the list, I need to give some rules:

1. Obviously I had to read the book to have an opinion, so this list is bound by my personal taste.
2. No chemical or magical change allowed.  This hurt some talented writers like Lyka Bloom, DL Savage, Jessie Ash, and Courtney Captisa for sure.
3. The story had to be forced, which again elimintated some terrific books.
4. This is individual stories, not series, which hurt writers like Alyssa Paige and Mindi Harris
5. The stories had to be from 2015, so some great stories missed the cut for that reason.
6. Finally, my own books were not eligible.  However, since I love to brag about my own work:
My Best Story - French Exchange
My Best Series - The Boys of Alpha Theta Nu
My Favorite Project - Thirty-Two Flavors because I loved the round robin nature. 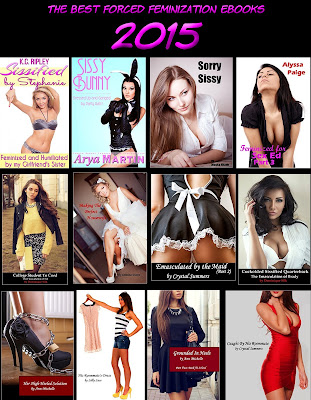 12, Sissified and Humiliated (K.C. Ripley) - This is the definition of one-handed reading material and forced bi as female domination.

11. Sissy Bunny (Arya Martin) - Arya is a great new writer on the scene.  She's consistently good, but hasn't had that one amazing story yet.  Sissy Bunny is closest.

10. Sorry Sissy (Mina Black) - Another great one-handed read with a man reduced to mere humiliation fodder by his step-daughter.  Doesn't feel at all incestuous since the step-daughter breaks up the marriage right away.

9. Feminized for Sex Ed Pt 3 (Alyssa Paige) - In all of her stories, Alyssa really does an outstanding job with the supporting characters.  This story introduces a sales girl who makes the who series work for me.

7. College Student to Coed: The Emasculation of Ted (Dominique Silk) - Ms. Silk is 2015's rookie of the year.  This was the first story I read of hers that let me know she was a reader I would be coming back to again and again.

5. Emasculated by the Maid Pt 2 (Crystal Summers) - It's hard to do anything new with the wealthy man turned into a French Maid by his own maid story, but Crystal Summers tells it in a very fun way.  I think I even liked part one better, but it came out in the last week of 2014.

4. High-Heeled Punishment (Anne Michelle) - It all just falls into place with an ending that makes the whole story.

3. Grounded in Heels 2 (Anne Michelle) - She has back to back entries on the list and deserves it.  It's hard to follow up a classic and GIH2 does just that and does it with an even more character driven stori.

1. Caught by His Roommate (Crystal Summers) - Another worn out premise given new life by a skilled author.  I cursed Ms. Summers out for writing a story I wanted to write when this one came out.  The criticism still holds.
Posted by Kylie at 1:57 PM