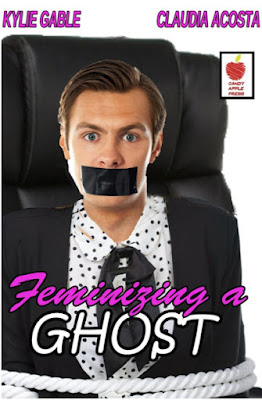 This may have been the first book I have ever written where the toughest part was naming the damn thing. Feminizing a Ghost isn't a bad title, but I have been worried people would think I meant a real ghost.  I got the idea for Feminizing a Ghost from an interview on NPR with an advice columnist. She talked about receiving an email from a guy who ghosted a woman and now 10 years later, he discovered she was going to be his boss.

If you've never heard of ghosting, it's when somebody is cowardly to face a confrontation so they just completely vanish from their lover or spouse's life. That's what happens in this story. When Andi is on vacation with her best friend, the friend's fiancee Jake cleans out his stuff from their apartment and just vanishes. It's 6 years later, he doesn't remember Andi and she's about to be his new coworker.

At it's heart it's mostly about the actual act of feminizing Jake and the powerful humiliation that he feels at  the hand of Andi and the girlfriend he ghosted.
Posted by Kylie at 5:54 PM