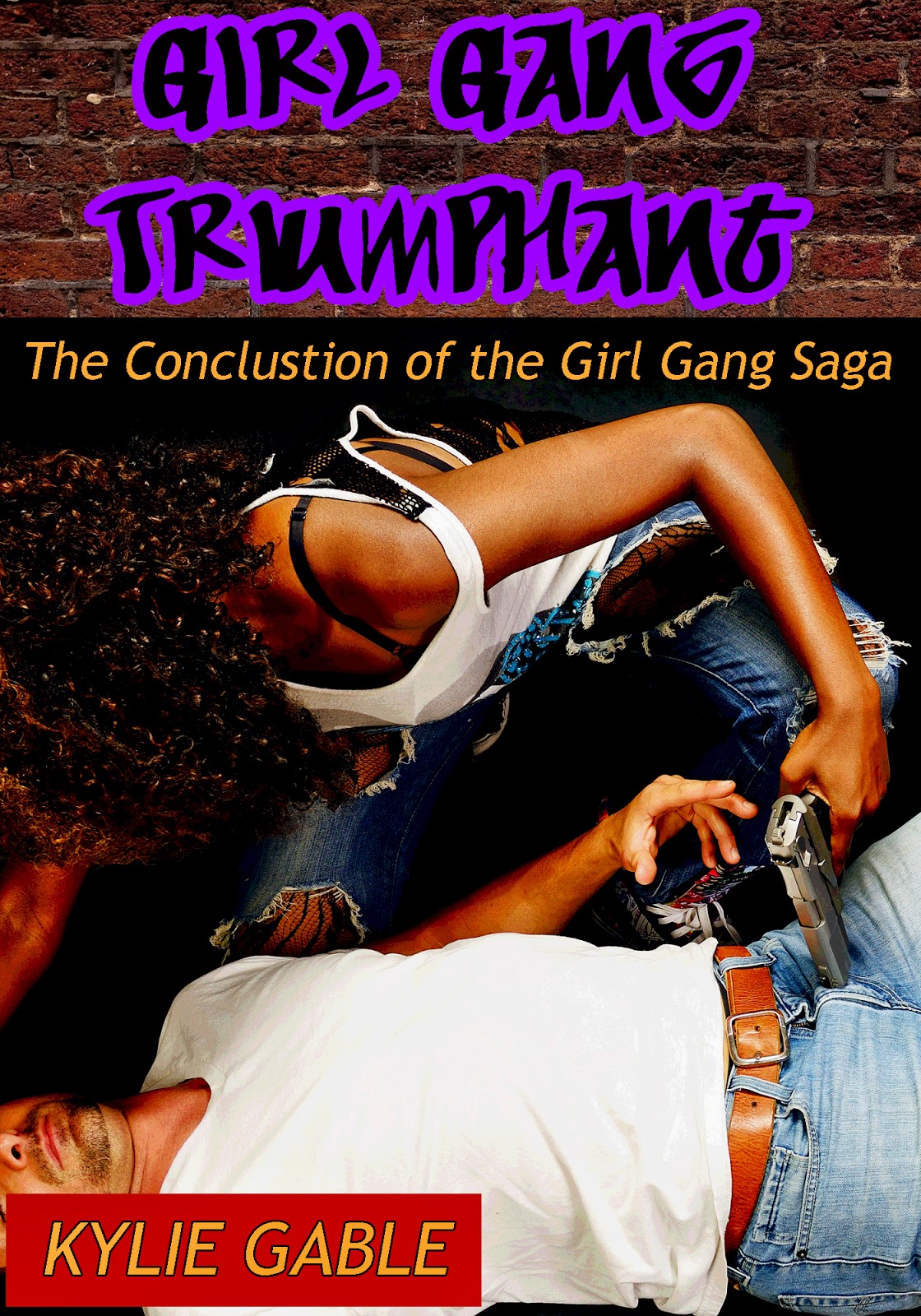 When we last left Wesley, he had been rescued from the Insane Royals by the Banshees street gang that had previously done so much to destroy his life.  It was after all, Laura and her former gang who had feminized him, humiliated him, made him a cock sucker, put his life in danger, got him fired from his job, and cuckolded in his marriage.  Now, he probably owes them his life.

The Banshees are in deep trouble.  As street gangs go, they have less than twenty unarmed members who joined together for self-protection.  The Insane Royals are a criminal organization with 10,000 members who are out for blood, since Wesley nearly gelded their leader.

Wesley again finds himself the subject of Marisol's scorn and is promptly tied tightly to a chair in his hotel room.  Can the Banshees survive the threat of the Royals?  Can Wesley survive close proximity with Marisol?  Well, now that would be telling.


"Wesley, you're our best chance of pulling this off.  We need you to do this," coaxed Laura.
"He'll do it.  I'll get him ready," assured Julia from the kitchen doorway.  She had returned with the groceries and was taking the girls' side against her own husband.
"Thanks Julia," smiled Laura.  Wesley shot daggers at his wife.  She had betrayed him yet again.  First was the cuckolding and now she was volunteering to do who knows what with the bikers.
"Come with me Wesley.  Let's get you ready," ordered Julia after she handed off her groceries to Rebecca.  Wesley was about to tell her off, but Marisol got up very close to him and gave him a look that made him think twice.  He meekly followed his wife into one of the bedrooms.
"Why did you do that?  Do you have any idea what will happen if those bikers find out I'm a guy or what I'll have to do to make sure that they don't?" demanded Wesley.
"I did it because you owe each and every one of those girls.  They put themselves in the crosshairs for you and if that means you have to kiss a couple of bikers to get them out of it, so be it," responded Julia sternly.
"Those bikers will want more than kissing."
"So? Grow the fuck up, Wesley.  It's nothing you haven't done a lot of already."
"But..." stammered Wesley.  Tears welled up in his eyes and he found himself unable to make a sound.
"Wesley, we've all lost something here.  The Royals killed Niko.  This isn't going to get better unless we all make some sacrifices.  Dry your tears and hold your head up high.  You're a survivor Wesley and all of those girls are counting on you."
"Okay," nodded Wesley. "I'm sorry about Niko."
"Me too," sighed Julia as she went over Wesley's eye makeup. "I really cared for him, but mostly it was just sex for both of us.  I'm sure that I'll be able to find someone to scratch that itch.  I'm still in shock that they killed him like that.  He didn't deserve it."
"No, I guess not," sighed Wesley deflated.
"We really need to teach you how to do this better yourself," suggested Julia stepping back to admire her work.
"That won't be necessary.  This is my last time dressing like this."
"I wouldn't bet on that," giggled Julia.
"It is," insisted Wesley.
"Are you suddenly growing a pair now?" chuckled Julia.  "What happens if Laura or Marisol decides you should be in panties?  What happens if I decide it?"
"You?  Why would you do that?"
"Aw Princess, I still love you, but more like a girlfriend than like a husband.  I think I prefer you in skirts.  It'll be less intimidating for any guys I bring home if you're mincing around serving us in heels, fixing your heavy makeup in the mirror, and serving us as a French maid.  They won't see you as any kind of threat and then it won't seem strange for them to fuck me."
"Julia, I can't do that, I'm your husband," he sobbed.
"Oh that ship sailed long ago, sweetie.  Now pucker up." Julia unscrewed the cap off of a tube of candy apple red lipstick and applied it to Wesley's lips, "Would you look at those lips.  They're just perfect for cock now."
"I-I won't do it," stammered Wesley.
"You don't have a choice.  Don't be silly.  Now, take off your skirt and blouse.  I think I found a few things more appropriate," commanded Julia. "They had a lot of old clothes in one of the closets that should fit you perfectly."
Glumly, Wesley complied with Julia's instructions.  She helped him into a tight white lace crop top that showed his curves to perfection and a ridiculously tiny pair of denim short shorts.  With his women's leather jacket, sexy boots, and lingerie he looked the part of trashy biker babe.

Girl Gang Triumphant is available at Amazon.
Posted by Kylie at 1:45 PM