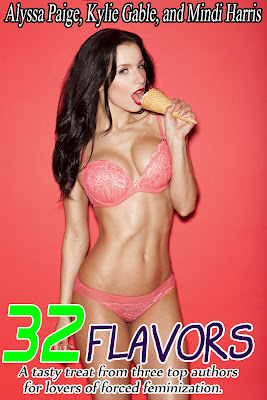 
The Ferrari screeched to a halt in the mini-mall parking lot.  He loved the way that all the high school kids in the parking lot suddenly perked up when they saw the 458 that he got with his bonus back in 2010.
The only thing that was more ridiculous than a thirty-year old executive in a $1,200 suit pursuing a twenty-three year old counter girl at an ice cream parlor was that she didn't seem interested.  He could give her opportunities that the minimum wage boys in her circle never could.  He was a good looking guy and he was the one pursuing her. Didn't she see what an idiot she was being?
As Kevin Kane walked into Angie's Thirty-Two Flavors, the four girls working the counter straightened up.  Miranda ran to go grab Tina from the back room.  Tina and Kevin were always the topic of conversation as he made no effort to hide his attraction to her. Miranda and Nora were naturally attracted to him.  Even without the money, he was cute.  He was only five foot nine, but he had luxuriously thick brown hair and an easy smile that seemed to light up the whole room.  His eyes were only on Tina.
She was an Italian girl--dark hair, feisty temper, and no reluctance to say whatever was on her mind.  She liked Kevin at a distance, but he wasn't her type and his pushy attempts to sweep her off her feet were having the opposite effect.  She was a very attractive girl with piercing eyes, Monroe hips, and a perky pair of 36Cs that turned guys' heads.
"Hello Kevin," she greeted. "The usual today?"
"If by usual you mean hitting on you," he replied.
"And me turning you down?" asked Tina. "Actually I meant the ice cream."
"See, why do you always go and spoil it?" asked Kevin.  "I've seen the losers that you hang out with.  I'm successful, good looking, and everything you could hope for in a guy.  You need to wake up."
"Oh really?" seethed Tina. She didn't appreciate having her friends called losers regardless of how much money this guy had.
"You're lucky I pay any attention to you at all.  I have much hotter girls throwing themselves at me," added Kevin pouring gasoline on Tina's fiery temper.
"Since you put it that way, come on back here," purred Tina, lifting the arm keeping customers from stepping behind the counter.
"Can't you get in trouble for this?" asked Kevin stepping behind the counter.  The store was empty inside despite a large crowd eating their frozen treats in the parking lot.
"I just wanted to see something," replied Tina undoing his belt and laughing as she looked down into his pants. "Not much down there is there."
"Nobody ever complained before," snapped Kevin defensively.
"I didn't see any nuts.  Let's fix that," smiled Tina as she reached over and grabbed the large scoop and dumped ten ounces of milk chocolate macadamia nut ice cream down his pants followed by a ladle full of real hot fudge.
"What the Hell?" gasped Kevin in shock.  "These pants cost more than you make in a week."
Tina's manager Rob had always rated her highly, but he saw no choice other than firing her for this kind of behavior.  Kevin, however, had another idea.  He'd forget the whole incident if Tina would just agree to go out with him.  Rob was thrilled with the idea.  He hated to lose a great employee, but Tina was less excited.  She finally agreed to the date, but it would be on her terms.