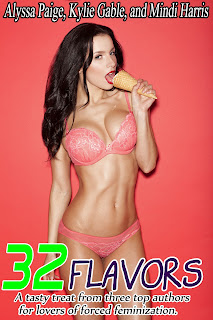 “I’m not sure why you get to dictate the terms, I’m the one with the ruined pants,” Kevin sneered.
Tina scoffed and folded her arms under her breasts.  From Kevin’s vantage point  it almost looked like she was presenting them to him.  They were so full, so delicious.  He had fantasized about them more times than he could count.  Kevin knew that he would have to play along.  If she was fired, any chance he ever had would be toast.  His destroyed pants got him the opportunity for a date, but she still held the power.  All she had at stake was a job at an ice cream store.  She’d probably have a new job in a day at any restaurant in town.  Kevin had much more at stake… the chance to win Tina over.
He swallowed hard and pushed his pride down.  “Ok ok, jeez.  Fine.  What are your terms,” he asked.
Tina smiled.  “First, you’re paying for everything.”
Kevin laughed.  “Naturally.”
“Second, I pick where we are going and what we do.”
Kevin nodded.  “Fine by me.”  These terms weren’t bad at all.
“Third… no matter what happens on our date, you go along with it.”
Kevin raised an eyebrow.  “Uh… yeah ok.  Don’t worry I don’t scare easily,” he said with a wink.
Tina rolled her eyes and looked down at Kevin’s crotch.  She really did make a mess of his pants.  She reached out and grabbed him by the belt.  “Then it’s a deal.  C’mon, let’s get you cleaned up.”
She tugged Kevin towards the back and gave Rob a smile.  Rob breathed a sigh of relief, a high roller like Kevin could have really put the screws to him.  “I’ll cover for you, Tina.  Just take care of him, no more trouble please,” Rob pleaded.
“Of course, boss,” she said as she pushed the door to the back room open.  She led Kevin back towards the breakroom.  Closing and locking the door behind her, she pushed herself close to Kevin.  “Let’s get you cleaned up,” she said breathlessly.
Kevin was beside himself as she undid his pants and in one swift motion pulled them and his boxers to the floor.  His semi hard cock flopped out, which caused Tina to laugh.
“It’s… it’s a little cold back here,” he stammered.  His fantasies never had him naked in front of Tina like this.
“Uh huh, it could be 90 degrees in here and I’d still be laughing at that,” she said, pointing to his rapidly softening cock with a broad smile.  Kevin moved his hands to cover himself and she swatted them away.  “Ah ah, no hiding from me now.  I’ve seen what you got, not like itsgonna get any bigger when I’m not looking.”
Kevin bit his lip nervously as Tina had him step out of his pants and boxers.
“Looks like the boxers took the brunt of it, sorry,” she said as she tossed the ice cream and fudge coated garment into the trash.
“Hey, what am  I supposed to wear now?”
“Oh, I have something you can borrow,” she said with a wry grin.

This part of the story is from the creative mind of Alyssa Paige.   You can  visit her Amazon page here.   Up next is Mindi Harris who just released her first feminization book on Amazon today.  I can't wait!
Posted by Kylie at 4:29 PM