Interview with a Feminizer Part II 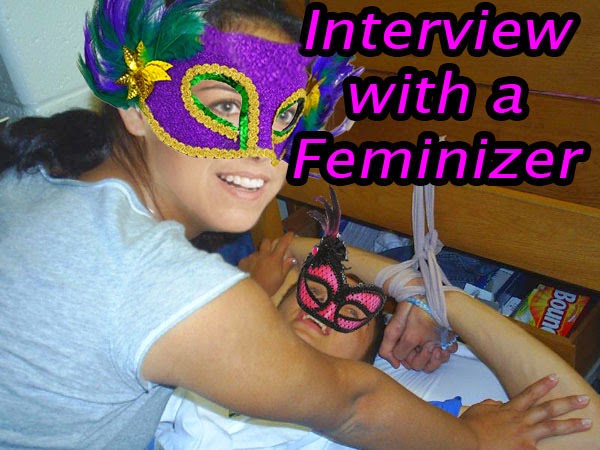 Kylie: I really have to ask, how did you all know what to do?  It felt very methodical like you had a whole plan laid out step by step.  Week one, Kylie wears a bra; week two Kylie paints her toes; week three Kylie wears pantyhose; week four Kylie wears a bra.  It seemed like everything was worked out.  It made it more humiliating than if you had added all those things at once.

Deanna: Well, yeah we knew adding a new thing every week would be embarrassing, but it wasn't like we had a plan.  I was actually responsible for the pantyhose.  I had a summer job that required pantyhose as part of the dress code and I hated wearing them.  I guess I thought they'd be perfect for you lol.

Kylie: I actually kind of liked them :).

Deanna:  You liked everything.

Kylie: Actually, I think you realized that  I liked it before I did.  So you didn't have a plan on feminizing myself and Nicole.

Deanna: Nicole is different.  We did kind of have a plan for Nicole, but that was because we just followed a lot of the same stuff we did for you.

Kylie: Do you know if Amanda ever feminized anybody before me.  I kind of have this vision of her hometown being full of her previous "victims" :)

Deanna: There were two guys in her hometown.  One was a neighbor and the other was the brother of one of her friends.  They would play dress up and I don't think those boys did it voluntarily either, but it was nothing like we did to you.  That was epic.

Kylie: Yeah, I had a lot of dresses in my closet.

Deanna: You had a lot of everything.  You had sexier clothes than we ever did, especially your lingerie.

Kylie: Do you remember tricking me and Nicole into picking out lingerie for each other.

Deanna: Oh yeah lol, that was probably the meanest thing I ever did and I had so much fun.  You both had nice taste, but the look on your face when you opened your gift bags and saw the lingerie in there was priceless.  You knew we were up to no good too.

Kylie: What were your favorite moments.

Deanna: Well you mentioned one of them.  Another was when you went home for a weekend and we gave your room a makeover.  We tried to find all the odds and ends we could laying around, but we had to buy the boy band posters.

Kylie.  The Hello Kitty comforter just floored me lol.  There was no way I could have anybody in my room after that.  Anything else?

Deanna: There was one time when Wendy and I were in the library with you and it was kind of empty in the section we were in.   We just started slowly putting makeup, nail polish, and accessories on you.  You would groan with each new thing that we added to your ensemble.

Kylie: I had forgotten that one.  I was really embarrassed to walk out of the library past everybody after everything you did.